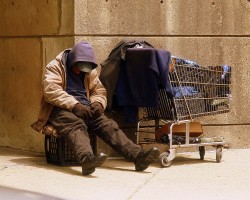 Sometimes it can be easy to forget that behind all of the horrible economic numbers that we hear about are millions of real people that have had their lives absolutely devastated by this economy.  Elderly couples are being brutally evicted from their homes, young families are living in their cars, terminally ill people are dying because they cannot afford medication that they need and millions of parents can’t sleep at night as they wrestle with anxiety over not being able to provide for their children.  Often those that lose their jobs or their homes discover that people start looking at them very differently and that there is very little compassion out there these days.  As you will read about below, one major U.S. bank is even kicking an elderly woman with stage 4 breast cancer out of her home because she cannot make her full mortgage payment each month.  When the next major global financial catastrophe happens, we are going to see a whole lot more economic despair.  Will society respond to that crisis by becoming warmer and more compassionate, or will the world around us become even more cold and even more cruel?  As bad as things are right now, it truly is frightening to think about what the world is going to look like after the next major economic downturn.

Many of the stories that you are about to read are truly heartbreaking.  Unfortunately, they represent thousands upon thousands of other stories that never make it into the news….

Foreclosing On An Elderly Woman With Stage 4 Breast Cancer

Wells Fargo is threatening to evict an elderly woman with stage 4 breast cancer named Cindi Davis from her family home in North Carolina….

“They want us to make a house payment of almost $900 a month,” Cindi told the station of their lender, Wells Fargo bank. “We can afford maybe half that. I pay $1,100 a month in prescription medications.”

The couple says they have tried to work with Wells Fargo, even sending notes from Cindi’s doctors explaining her condition, but haven’t been able to come to a workable solution.

“They’re just going to put us out and it’s like, we are willing to pay what we can pay, but it’s not enough,” Cindi said.

Her cancer is in her lungs, lymph nodes and on her liver and she’s gone through a double mastectomy and multiple chemotherapy treatments, but Cindi has handled her disease like a fighter.

Cindi and her husband say that if they are evicted they may have to move in to their pickup truck.

Can you imagine living your last days in a truck as you try desperately to battle stage 4 breast cancer?

As I have written about before, Greece is essentially experiencing a full-blown economic depression at this point.

There is a severe shortage of medicine in Greece right now, and many doctors are essentially volunteers at this point because so few people can actually afford to pay their bills.  The following description of the chaos in the Greek healthcare system comes from a recent Natural News article….

The economic situation in Greece is only continuing to worsen, as reports indicate that hospitals and care centers throughout the nation are running completely out of medicines, and many healthcare workers are now voluntarily providing care services without pay.

Strapped with spiraling debt, the Greek healthcare, which is government-run, has had to receive gobs of international financial aid just to keep operating with some semblance of normalcy. There has also been plenty of IOUs issued, and desperate patients quietly forking over cash “gifts” to doctors to receive treatments. All in all, the healthcare situation is in utter chaos, save for those that have sacrificed their own time, often free of charge, just to help those in need.

But it is not just the healthcare system that is deeply troubled.

Economic conditions have gotten so bad in Greece that some parents are actually abandoning their children in the streets according to the Daily Mail….

Children are being abandoned on Greece’s streets by their poverty-stricken families who cannot afford to look after them any more.

Youngsters are being dumped by their parents who are struggling to make ends meet in what is fast becoming the most tragic human consequence of the Euro crisis.

Could you ever do that to your children?

Sadly, it looks like things are going to get even worse in Greece.  It is being projected that the unemployment rate in Greece will reach 30 percent by the end of the year.

Greece is not the only European nation that is going through an economic nightmare right now.  The truth is that much of southern Europe is virtually shutting down right now.

Simon Black has described what he witnessed during a recent visit to Porto – the second largest city in Portugal….

Street-level retail shops and restaurants are either devoid of customers or have been vacated. On many blocks I’ve seen more “for lease” signs than operating businesses.

Officially, the unemployment rate is 15.2% in Portugal, and the economy will contract 3% this year… yet the clear lack of economic activity suggests the real figures are much greater.

Without doubt, reality has set in. Locals have capitulated ‘hope’ that the good times will magically re-appear and have adjusted their habits accordingly.

American Families Living In Their Cars

In some areas of the United States you would never even know that an economic crisis is happening, but in other areas things are clearly falling apart very rapidly.  There is a very serious shortage of decent jobs in most parts of the country, and we are seeing clear signs of societal breakdown in many of our major cities.

During the last recession, millions of Americans lost their jobs.  Because a lot of them did not have much money saved up, many of those unemployed Americans also quickly lost their homes.

In the end, some of them ended up living in their vehicles.

And living in a car can be absolute hell.  The following is from an ABC News report….

Three children — one suffering second-degree burns — were taken into protective custody Monday after they were discovered living with their parents in a “filthy” car in a Walmart parking lot.

Police were called to the parking lot Monday morning in Mount Dora, Fla., where they found the family of five living in a 1987 Cadillac Coupe de Ville full of clothes and garbage. Police told the Orlando Sentinel that days-old chicken bones were strewn about the car, along with a spoiled carton of milk and a bottle of tequila.

Other families try to make the best of it that they can.  The following is one touching example from a recent 60 Minutes report….

This is the home of the Metzger family. Arielle, 15. Her brother Austin, 13. Their mother died when they were very young. Their dad, Tom, is a carpenter.  And, he’s been looking for work ever since Florida’s construction industry collapsed. When foreclosure took their house, he bought the truck on Craigslist with his last thousand dollars. Tom’s a little camera shy – thought we ought to talk to the kids – and it didn’t take long to see why.

Arielle Metzger: Yeah it’s not really that much an embarrassment. I mean, it’s only life. You do what you need to do, right?

Could you imagine being 13 years old or 15 years old and living in a truck?

Unfortunately, during the next major economic downturn a whole lot more families are going to end up living like this.

Yesterday I wrote about how corn crops are dying all over the United States right now.

For most Americans, this will just mean higher prices at the grocery store.

But for corn farmers, a lack of rain can be absolutely devastating.  The following are some recent comments from farmers about this crippling drought on agweb.com….

Dryland corn is done! Some people in denial need to walk in field. Later corn tasseled and pollinating with no silks! No rain in seven days or low humidity 90 degrees and warmer by weekend. Yield range for corn on our farms…0 to 0 bpa. Soybeans…if it rains which is a big if may have some hope, not holding my breath!!

This is my 50th year of grain farming, so I think that I can say that I’ve seen it all. This is worse than 1988-Much worse for corn. Beans could still be fair if it starts to rain soon. Sat.-Sun. rains totaled only 1/4 inch.

You can see some incredible pictures of the drought in the middle part of the country right here.

When the economy falls to pieces, the politicians and the big banks get all the air time, but it is average hard working people that feel the most pain.

As the economy gets a lot worse (and it will) there is going to be a huge need for more love and compassion.  The government is not going to be able “to save” everyone, and even now way too many people are falling through the cracks in the “safety net”.

Instead of looking down on the homeless and the unemployed, don’t be afraid to give them a helping hand up.

You never know, you might be the one in need of some assistance someday. 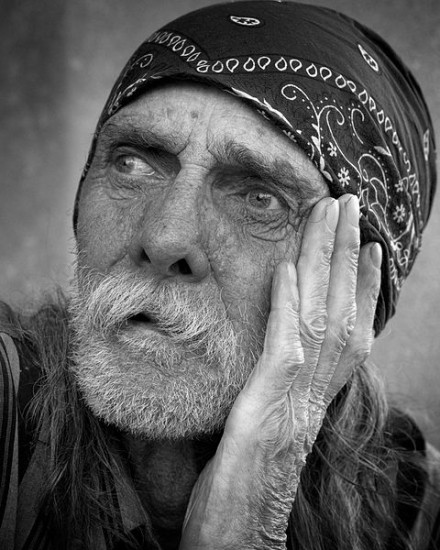