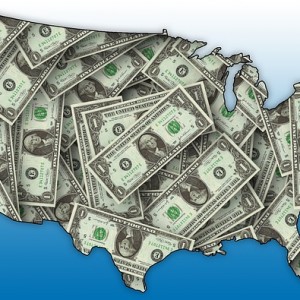 When people feel like they don’t have anything else to lose, they are likely to do just about anything.  Many in the mainstream media seem absolutely mystified as to why there is so much anger in Ferguson, but as I pointed out yesterday, all of this anger did not erupt out of a vacuum.  Economic conditions in Ferguson, and for African-Americans as a whole, have been deteriorating for years.  Sadly, many white Americans are totally oblivious to any of this.  Many of them have absolutely no idea that the unemployment rate for black Americans is more than twice as high as it is for white Americans or that the average white household has 22 times as much wealth as the average black household.  But these are things that black communities are acutely aware of.  Many African-Americans that live in poor neighborhoods deeply resent the fact that most of the people that live in the “good neighborhoods” are white while most of the people that live in “bad neighborhoods” are people of color.  In fact, in America today a black child is nearly four times as likely to live in an impoverished neighborhood as a white child is.  And when you throw endless police brutality and growing racial division in America into the mix, it is easy to understand why so many black Americans are so angry and frustrated these days.

Things didn’t have to turn out this way.  If we had all learned how to love one another and not judge one another by skin color, we could have had the kind of society that Martin Luther King once dreamed about…

And when this happens, when we allow freedom to ring, when we let it ring from every village and hamlet, from every state and every city, we will be able to speed up that day when all of God’s children, black men and white men, Jews and Gentiles, Protestants and Catholics, will be able to join hands and sing in the words of the old Negro spiritual, “Free at last! Free at last! Thank God almighty, we’re free at last!”

But instead we have allowed ourselves to become increasingly divided.  And I am sure that fact will once again be reflected in the comments following this article.  There is so much anger and hatred in America today, and people seem to love to express their anger and hatred on the Internet.

For white Americans (myself included), I think that it would be good for us to put ourselves in the shoes of the people of Ferguson for a few moments.  For years, the economy of Ferguson has been declining.  The following is how Brookings summarized the current economic situation…

The city’s unemployment rate rose from less than 5 percent in 2000 to over 13 percent in 2010-12. For those residents who were employed, inflation-adjusted average earnings fell by one-third. The number of households using federal Housing Choice Vouchers climbed from roughly 300 in 2000 to more than 800 by the end of the decade.

Amid these changes, poverty skyrocketed. Between 2000 and 2010-2012, Ferguson’s poor population doubled. By the end of that period, roughly one in four residents lived below the federal poverty line ($23,492 for a family of four in 2012), and 44 percent fell below twice that level.

And as the New York Times recently detailed, racial tensions have been rising in the city for a very long time…

As African-Americans moved into the city and whites moved out, real estate agents and city leaders, in a pattern familiar elsewhere in the country, conspired to keep blacks out of the suburbs through the use of zoning ordinances and restrictive covenants. But by the 1970s, some of those barriers had started to fall, and whites moved even farther away from the city. These days, Ferguson is like many of the suburbs around St. Louis, inner-ring towns that accommodated white flight decades ago but that are now largely black. And yet they retain a white power structure.

Although about two-thirds of Ferguson residents are black, its mayor and five of its six City Council members are white. Only three of the town’s 53 police officers are black.

So it is understandable why a lot of Ferguson residents are so angry and so frustrated.

However, there is absolutely no excuse for the looting and the property destruction that have taken place.

Alternatively, there is absolutely no excuse for how brutally the (mostly white) police have handled peaceful protesters and the media.  The police have been using smoke bombs, tear gas, flash bang grenades, rubber bullets and LRAD sound cannons against protesters that are not even armed.  Meanwhile, the police have been doing next to nothing to stop criminals from looting stores and businesses all over Ferguson.  It has pretty much been a textbook case of what not to do during a period of civil unrest.

Hopefully cooler heads will prevail and things will calm down in Ferguson soon.

But that doesn’t mean that the underlying problems will have been fixed.  The truth is that I believe that this is just a preview of what is coming to America in the years ahead.  And much of the anger and frustration that is bubbling just under the surface in our communities has an economic element to it.  The following are 10 startling facts about the massive economic gap between white America and black America that we see in our country today…

#2 A report released earlier this year discovered that the “underemployment rate” for African-American workers was 20.5 percent.  But for white Americans it was only 11.8 percent.

#3 A study released back in 2012 found that the average white household has 22 times as much wealth as the average black household.

#5 One study discovered that 82 percent of white students graduate from high school but only 63.5 percent of black students do.

#7 In the United States today, 12 percent of white children live in areas of concentrated poverty, but 45 percent of African-American children do.

#8 According to the U.S. Census Bureau, 19.9 percent of white children live in single parent homes.  But for black children, the number is an astounding 52.1 percent.

#10 In the United States, the incarceration rate for black men is more than six times higher than it is for white men.

So how do we solve these problems?  People have been debating this for years, but nothing ever seems to actually get accomplished.

Meanwhile, the middle class continues to collapse and things continue to get even tougher for African-American communities.  The following is an excerpt from a recent piece that Kareem Abdul-Jabbar wrote for Time magazine entitled “The Coming Race War Won’t Be About Race“…

Dystopian books and movies like Snowpiercer, The Giver, Divergent, Hunger Games, and Elysium have been the rage for the past few years. Not just because they express teen frustration at authority figures. That would explain some of the popularity among younger audiences, but not among twentysomethings and even older adults. The real reason we flock to see Donald Sutherland’s porcelain portrayal in Hunger Games of a cold, ruthless president of the U.S. dedicated to preserving the rich while grinding his heel into the necks of the poor is that it rings true in a society in which the One Percent gets richer while our middle class is collapsing.

That’s not hyperbole; statistics prove this to be true. According to a 2012 Pew Research Center report, just half of U.S. households are middle-income, a drop of 11 percent since the 1970s; median middle-class income has dropped by 5 percent in the last ten years, total wealth is down 28 percent. Fewer people (just 23 percent) think they will have enough money to retire. Most damning of all: fewer Americans than ever believe in the American Dream mantra that hard work will get them ahead.

I wish that I could be more optimistic about the future of this country.

I wish that I could believe that we won’t see a tremendous amount of chaos in the streets of America in the years ahead.

Unfortunately, the truth is that what is happening in Ferguson right now is just the tip of the iceberg.  Once we hit the next major wave of our ongoing economic collapse, unemployment and economic despair in our major cities are going to grow rapidly.  This will fuel more anger, more frustration, more protests, more looting and more rioting.

It has been said that desperate people do desperate things.  And in the years ahead, ordinary Americans are going to become increasingly desperate.

I hope that you are getting ready for that.