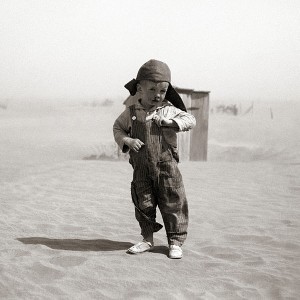 What is life going to look like as our precious water resources become increasingly strained and the western half of the United States becomes bone dry?  Scientists tell us that the 20th century was the wettest century in the western half of the country in 1000 years, and now things appear to be reverting to their normal historical patterns.  But we have built teeming cities in the desert such as Phoenix and Las Vegas that support millions of people.  Cities all over the Southwest continue to grow even as the Colorado River, Lake Mead and the High Plains Aquifer system run dry.  So what are we going to do when there isn’t enough water to irrigate our crops or run through our water systems?  Already we are seeing some ominous signs that Dust Bowl conditions are starting to return to the region.  In the past couple of years we have seen giant dust storms known as “haboobs” roll through Phoenix, and 6 of the 10 worst years for wildfires ever recorded in the United States have all come since the year 2000.  In fact, according to the Los Angeles Times, “the average number of fires larger than 1,000 acres in a year has nearly quadrupled in Arizona and Idaho and has doubled in every other Western state” since the 1970s.  But scientists are warning that they expect the western United States to become much drier than it is now.  What will the western half of the country look like once that happens?

The wet 20th century, the wettest of the past millennium, the century when Americans built an incredible civilization in the desert, is over.

Much of the western half of the country has historically been a desolate wasteland.  We were very blessed to enjoy very wet conditions for most of the last century, but now that era appears to be over.

To compensate, we are putting a tremendous burden on our fresh water resources.  In particular, the Colorado River is becoming increasingly strained.  Without the Colorado River, many of our largest cities simply would not be able to function.  The following is from a recent Stratfor article…

The Colorado River provides water for irrigation of roughly 15 percent of the crops in the United States, including vegetables, fruits, cotton, alfalfa and hay. It also provides municipal water supplies for large cities, such as Phoenix, Tucson, Los Angeles, San Diego and Las Vegas, accounting for more than half of the water supply in many of these areas.

In particular, water levels in Lake Mead (which supplies most of the water for Las Vegas) have fallen dramatically over the past decade or so.  The following is an excerpt from an article posted on Smithsonian.com…

And boaters still roar across Nevada and Arizona’s Lake Mead, 110 miles long and formed by the Hoover Dam. But at the lake’s edge they can see lines in the rock walls, distinct as bathtub rings, showing the water level far lower than it once was—some 130 feet lower, as it happens, since 2000. Water resource officials say some of the reservoirs fed by the river will never be full again.

Today, Lake Mead supplies approximately 85 percent of the water that Las Vegas uses, and since 1998 the water level in Lake Mead has dropped by about 5.6 trillion gallons.

So what happens if Lake Mead continues to dry up?

Well, the truth is that it would be a major disaster…

Way before people run out of drinking water, something else happens: When Lake Mead falls below 1,050 feet, the Hoover Dam’s turbines shut down – less than four years from now, if the current trend holds – and in Vegas the lights start going out.

Ominously, these water woes are not confined to Las Vegas. Under contracts signed by President Obama in December 2011, Nevada gets only 23.37% of the electricity generated by the Hoover Dam. The other top recipients: Metropolitan Water District of Southern California (28.53%); state of Arizona (18.95%); city of Los Angeles (15.42%); and Southern California Edison (5.54%).

You can always build more power plants, but you can’t build more rivers, and the mighty Colorado carries the lifeblood of the Southwest. It services the water needs of an area the size of France, in which live 40 million people. In its natural state, the river poured 15.7 million acre-feet of water into the Gulf of California each year. Today, twelve years of drought have reduced the flow to about 12 million acre-feet, and human demand siphons off every bit of it; at its mouth, the riverbed is nothing but dust.

Nor is the decline in the water supply important only to the citizens of Las Vegas, Phoenix, and Los Angeles. It’s critical to the whole country. The Colorado is the sole source of water for southeastern California’s Imperial Valley, which has been made into one of the most productive agricultural areas in the US despite receiving an average of three inches of rain per year.

You hardly ever hear about this on the news, but the reality is that this is a slow-motion train wreck happening right in front of our eyes.

Today, the once mighty Colorado River runs dry about 50 miles north of the sea.  The following is an excerpt from an excellent article by Jonathan Waterman about what he found when he went to investigate this…

Fifty miles from the sea, 1.5 miles south of the Mexican border, I saw a river evaporate into a scum of phosphates and discarded water bottles. This dirty water sent me home with feet so badly infected that I couldn’t walk for a week. And a delta once renowned for its wildlife and wetlands is now all but part of the surrounding and parched Sonoran Desert. According to Mexican scientists whom I met with, the river has not flowed to the sea since 1998. If the Endangered Species Act had any teeth in Mexico, we might have a chance to save the giant sea bass (totoaba), clams, the Sea of Cortez shrimp fishery that depends upon freshwater returns, and dozens of bird species.

So let this stand as an open invitation to the former Secretary of the Interior and all water buffalos who insist upon telling us that there is no scarcity of water here or in the Mexican Delta. Leave the sprinklered green lawns outside the Aspen conferences, come with me, and I’ll show you a Colorado River running dry from its headwaters to the sea. It is polluted and compromised by industry and agriculture. It is overallocated, drought stricken, and soon to suffer greatly from population growth. If other leaders in our administration continue the whitewash, the scarcity of knowledge and lack of conservation measures will cripple a western civilization built upon water.

Further east, the major problem is the drying up of our underground water resources.

In the state of Kansas today, many farmers that used to be able to pump plenty of water to irrigate their crops are discovering that the water underneath their land is now gone.  The following is an excerpt from a recent article in the New York Times…

Vast stretches of Texas farmland lying over the aquifer no longer support irrigation. In west-central Kansas, up to a fifth of the irrigated farmland along a 100-mile swath of the aquifer has already gone dry. In many other places, there no longer is enough water to supply farmers’ peak needs during Kansas’ scorching summers.

And when the groundwater runs out, it is gone for good. Refilling the aquifer would require hundreds, if not thousands, of years of rains.

So what is going to happen to “the breadbasket of the world” as this underground water continues to dry up?

Most Americans have never even heard of the Ogallala Aquifer, but it is one of our most important natural resources.  It is one of the largest sources of fresh water on the entire planet, and farmers use water from the Ogallala Aquifer to irrigate more than 15 million acres of crops each year.  It covers more than 100,000 square miles and it sits underneath the states of Texas, New Mexico, Oklahoma, Colorado, Kansas, Nebraska, Wyoming and South Dakota.

Unfortunately, today it is being drained dry at a staggering rate.  The following are a few statistics about this from one of my previous articles…

1. The Ogallala Aquifer is being drained at a rate of approximately 800 gallons per minute.

2. According to the U.S. Geological Survey, “a volume equivalent to two-thirds of the water in Lake Erie” has been permanently drained from the Ogallala Aquifer since 1940.

3. Decades ago, the Ogallala Aquifer had an average depth of approximately 240 feet, but today the average depth is just 80 feet. In some areas of Texas, the water is gone completely.

So exactly what do we plan to do once the water is gone?

We won’t be able to grow as many crops and we will not be able to support such large cities in the Southwest.

If we have a few more summers of severe drought that are anything like last summer, we are going to be staring a major emergency in the face very rapidly.

If you live in the western half of the country, you might want to start making plans for the future, because our politicians sure are not.