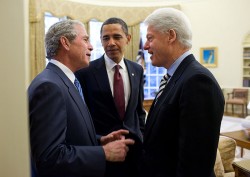 Today, there are protests all over America that are targeting “the one percent” and all of the wealth and power that they have accumulated.  Unfortunately, many of the solutions that these protesters are advocating simply will not work and will not lead to less wealth inequality.  To understand this, you have to understand how we got to this point.  Over the past several decades, our federal government has exploded in size and our large corporations have exploded in size.  In fact, we have seen this pattern happen pretty much all over the world.  Governments and corporations all over the globe are getting much bigger.  Whenever you have very, very large concentrations of money and power like that, it is going to lead to massive wealth inequality.  The Occupy Wall Street protesters would like to frame this debate as “socialism vs. capitalism”, but the truth is that wherever you find big government you will almost always find big corporations, and wherever you find big corporations you will almost always find big government.  Sure, they spar once in a while, but the reality is that big government and big corporations work in tandem most of the time.  Sometimes big government has the upper hand and sometimes big corporations have the upper hand, but they are both collectivist institutions.  Wherever you find collectivism in the world, you will find an elite that receives most of the benefits while the rest of the population suffers.  In the United States today, our gigantic government is thriving and our gigantic corporations are thriving and the middle class is rapidly shrinking.  The solution to this is not to replace one form of collectivism with another form of collectivism.  Rather, what we need is to go back to what our founding fathers intended.  They were extremely suspicious of large concentrations of wealth and power, and they intended for us to live in a capitalist system where individuals and small businesses had the freedom to compete and thrive.

Today, Democrats tell us that we need an even bigger government and that we need to redistribute even more wealth to the poor.  But the bigger the government gets, the more poor people we seem to have.  As you will see below, the only people that seem to be thriving from big government are the bureaucrats.

Republicans tell us that we need to make life better for the big corporations.  But the reality is that the bigger our giant corporations get, the faster the middle class shrinks.  The big corporations are shipping millions of our jobs out of the country, and they are magnets for wealth and power.  If you are not aware of how overwhelmingly dominant corporations have become in our society, just read this article.

Yes, there are always going to be some people that do much better than others (and there is nothing wrong with that), but we should not have a system which is designed to funnel almost all of the wealth and almost all of the power to a very small minority.

In essence, this article is arguing the following….

This was the view of our founding fathers, and this is what we need to get back to.

Let’s take a look at some of the results of our current system.  Let’s start with income inequality caused by big government.

So what is the cause of this?

Well, it is not because Washington D.C. is a great center of industry or finance.  Rather, it is because the federal government is spending over 3 trillion dollars a year and is showering huge piles of cash on hordes of bureaucrats.

In a recent article, I noted some of the mind blowing statistics that show how bureaucrats in Washington D.C. are living the high life at our expense….

*When you total up all compensation (including health care and benefits), the average income for a federal worker in the Washington D.C. area last year was $126,369.

As I have written about previously, our gigantic federal government also empowers the big corporations to continue to accumulate staggering amounts of wealth and power.  This is one reason why the big corporations contribute so much money to political campaigns.  The big corporations (and the elite that own and run them) have much more influence over the political process than we do.  They have spent decades buying politicians and getting laws passed that tilt the rules of the game radically in their favor.

This is something that our founding fathers did not want to happen.  In a 2010 article, Rick Ungar noted that there were very significant restrictions on corporations in the early days of America….

After the nation’s founding, corporations were, as they are today, the result of charters granted by the state. However, unlike today, they were limited in how long they were permitted to exist (typically 20 or 30 years), only permitted to deal in one commodity, they could not own shares in other corporations, and their property holdings were expressly limited to what they needed to accomplish their corporate business goals.

There was a lot of wisdom to that approach.  Our founding fathers knew that corporations would become giant magnets for wealth and power if they were allowed to grow unchecked.

Today, multinational corporations completely and totally dominate the global economy.  The following comes from a recent article I posted on The American Dream….

Corporations not only completely dominate the U.S. economy, they also completely dominate the global economy as well.  A newly released University of Zurich study examined more than 43,000 major multinational corporations.  The study discovered a vast web of interlocking ownerships that is controlled by a “core” of 1,318 giant corporations. But that “core” itself is controlled by a “super-entity” of 147 monolithic corporations that are very, very tightly knit.  As a recent article in NewScientist noted, these 147 corporations control approximately 40 percent of all the wealth in the entire network

These giant corporations are so dominant that it is nearly impossible to compete with them.  The number of small businesses in America is shrinking fast.

This is creating a tremendous amount of income inequality in the United States.  The middle class is being systematically destroyed, and the growth of the gap between the one percent and the rest of us just continues to accelerate.

Meanwhile, as a recent USA Today article noted, the middle class continues to falter in the majority of the communities around the United States….

So just how well is the top one percent doing compared to the rest of us?

The following statistics should be a wake up call for all of us….

*According to the Congressional Budget Office, the top one percent is the only group that saw its share of our national income increase between 1979 and 2007.

*In the United States today, the wealthiest one percent of all Americans have a greater net worth than the bottom 90 percent combined.

*According to Harvard Magazine, 66% of the income growth between 2001 and 2007 went to the top one percent of all Americans.

*The wealthiest one percent of all Americans own over 50% of all the stocks and bonds.

*Income inequality is not just growing in the United States.  Today, the wealthiest one percent of the earth’s population controls 39% of the wealth.

There is certainly nothing wrong with being wealthy.  If you and your family work really hard and provide great value to the community around you then you should greatly benefit.

But a system that is designed to systematically drain wealth from the general population and transfer it into the hands of an ultra-wealthy elite is not what our founding fathers ever hand in mind.  At the time of our founding, England was dominated by big government (the monarchy) and by big business (the East India Company, for example).  Our founders warned us over and over about the potential abuses that can happen when very large concentrations of wealth and power are allowed to dominate a society.

Unfortunately, the Occupy Wall Street movement has it all wrong.  They recognize the overwhelming wealth and power accumulated by the one percent, but most of them are advocating even more collectivism as the answer.

Some of them even say that they want to “end capitalism” altogether.  Michael Moore says that he is not part of the one percent and that he wants to “end capitalism”, even though he has made millions upon millions of dollars from his various projects.

Helping the poor is certainly a noble goal, and handouts can certainly ease suffering at least temporarily.  But handouts are never a permanent solution and they can cause large numbers of people to end up becoming completely and totally dependent on the government.

So has the plight of the poor gotten better?

No, we now have more than 45 million Americans on food stamps, last year we had the largest increase in the number of Americans living in poverty in U.S. history and the middle class continues to shrink rapidly.

The truth is that what poor and middle class Americans really need are opportunities.  Handouts will keep people alive, but they will not give people hope and a future.

What Americans really need is an environment where they can find jobs or start small businesses.  Unfortunately, the environment for small businesses in this country is incredibly toxic and millions of our good jobs have been shipped overseas.  The big corporations have discovered that they can make even bigger profits by sending jobs to countries where it is legal to pay slave labor wages.  To say that we need big corporations because they are the ones that “create jobs” is simply not true anymore.

So now we have tens of millions of Americans that we have to take care of every single month.  There is nothing wrong with helping them survive, but giving them even more handouts is not going to permanently solve anything.

We need to have a population that is empowered to work hard, produce wealth and create a bright future for their families.

Instead, what we have is a system that greatly rewards the top one percent and that is pushing all of the rest of us toward poverty.

So is any of this going to change any time soon?

Well, considering the fact that the vast majority of our politicians are in the pockets of the big corporations, I would not be getting your hopes up.