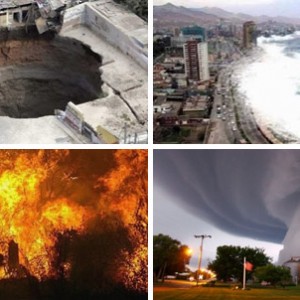 At a time when the American economy is already reeling like a drunken sailor, the United States is being hit by what seems like an endless parade of horrible disasters that threaten to push the fragile financial system over the edge.  The massive oil spill in the Gulf of Mexico that is now destroying not only the the entire economy of the Gulf Coast but also the entire way of life for hundreds of thousands of people is getting all the headlines right now, but it is far from the only major crisis that has hit the United States recently.  The old saying, “when it rains it pours”, is certainly applicable to the United States right now.  Already faced with some of the biggest economic problems in a generation, America is also being forced to deal with horrifying natural disasters, rapidly growing environmental nightmares and agricultural problems that could end up being absolutely unprecedented.  So why do so many bad things keep happening to the United States?  Does there come a point when the economic damage from all of these disasters just becomes too much?  After all, how many body blows can the “biggest economy in the world” take and still remain standing?

Consider just a few of the major disasters that the U.S. is having to deal with….

*The Gulf Of Mexico Oil Spill

So how much is this disaster going to cost?

Well, estimates vary at this point, but it is being reported that some analysts are already projecting that the costs related to the oil spill drifting toward Louisiana from a well operated by BP in the Gulf of Mexico could exceed 14 billion dollars.

The cost to the fishing industry in Louisiana alone could top 3 billion dollars, and it is being projected that the tourism industry in Florida could lose even more than that.

This is rapidly shaping up as one of the biggest environmental nightmares (perhaps the biggest) that the United States has ever had to face.  In fact, there are some who are saying that this incident has already eclipsed the 1989 Exxon Valdez incident as the worst U.S. oil disaster in history.

Louisiana Governor Bobby Jindal is warning that the oil spill in the Gulf threatens the very way of life of people in his state.  As bad as Hurricane Katrina was, there are those who are already claiming that this disaster will be worse than Hurricane Katrina for the region, because it will literally take years for this mess to be cleaned up.  In fact, there is a very real possibility that the fishing industry may be crippled for generations by this disaster.

*The Disappearance Of The Honeybees

For the fourth year in a row in the United States, more than a third of all bee colonies have failed to survive the winter.

To be more precise, according to the annual survey by the Apiary Inspectors of America and the U.S. government’s Agricultural Research Service, the number of managed honeybee colonies in the United States fell by 33.8% last winter.

Needless to say, this is not a good trend.

In fact, it could quickly turn into an unmitigated disaster as it is estimated that a third of all that we eat depends upon honeybee pollination.

Without honeybees, we are going to be in a world of hurt.

“The average person should care. Bees of all species are fundamental to the operation of our ecosystem.”

So what happens if they all die off?

You don’t even want to think about that.

But certainly our scientists can find a solution, right?

Well, the World Organization for Animal Health announced on Wednesday that the huge die off of bees worldwide is not due to any one single factor.

Some of the factors for the honeybee deaths the World Organization for Animal Health included in its report include parasites, viral and bacterial infections, pesticides, and poor nutrition.

Other researchers claim that genetically modified crops and cell phone transmissions are also playing a role in the disappearance of the honeybees.

But the truth is that a “solution” seems to be very far away right now and we are running out of time.

*The Deadly Tornadoes Which Have Ravaged The Southeast

Last Sunday saw an unprecedented outbreak of tornadoes across the southeast United States.  Officials said 61 tornadoes erupted as a massive storm marched across states such as Mississippi, Florida and South Carolina.

The tornadoes killed at least 12 people, and it is estimated that the damage that they caused could reach into the billions of dollars.

*The Drying Up Of The Ogallala Aquifer

Most Americans have never heard of the Ogallala Aquifer, but it is absolutely critical to food production in many areas of the United States.

The water from this massive underground lake is used to irrigate much of America’s Great Plains.  But it is being drained at a rate of approximately 800 gallons per minute and it is starting to dry up.

So why is that a bad thing?

Well, the Ogallala Aquifer is a gigantic underground lake that stretches from southern South Dakota all the way through northern Texas, covering approximately 174,000 square miles.

If it gets depleted, the era of “pivot irrigation” in the region will be over.  That would mean that the Great Plains could quickly turn into the Great American Desert.

America could very well see a return to the Dust Bowl days of the 1930s.

Even if agricultural production continues to grow normally, scientists are telling us that the world is heading for a massive global food shortage.  So what happens if our food production does not increase or is even reduced?

How long do you think that is going to last in the event of a major emergency?

The truth is that “the good times” we have all grown up with are not going to last forever.  The United States is in big trouble economically, and all of these natural disasters and environmental problems are not helping things one bit.

We are not entitled to endless wealth and prosperity just because we are Americans.  In fact, we have recklessly squandered the wealth that prior generations have left for us.

But even as the economy crumbles around them, millions of Americans will remain in denial until the day they have to cook a dinner of “mouse soup” for their starving family.