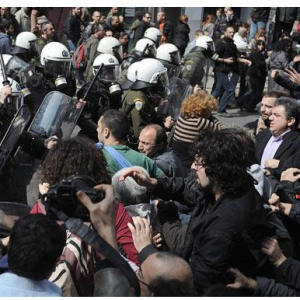 Up to this point, it seems as though most Americans have not really been too concerned about the financial meltdown that is taking place in Greece.  But they should be.  The truth is that the debt crisis we see playing out in Greece may soon repeat itself in some of the largest nations in the world such as Japan, the U.K. and even the United States.  Once upon a time, this kind of thing only happened in third world nations, but now virtually every nation on earth has a debt problem.  As the saying goes, the borrower is the servant of the lender, and so when a country like Greece gets in way, way too deep financially, it ends up having to give up a portion of its sovereignty to those controlling the purse strings.  In the case of Greece, those controlling the purse strings are the IMF and the EU.  But it just isn’t Greece that is in trouble.  Dozens of nations are in serious financial trouble and are at the mercy of those who can bail them out.  The truth is that global financial institutions like the IMF, the World Bank, the European Central Bank and the Federal Reserve are increasingly gaining power all over the globe as governments around the world continue to accumulate frightening amounts of debt.

This has been quite a week for Greece and for the other nations in Europe teetering on the edge of financial disaster.  Standard & Poor’s reduced Greek debt to “junk” status, and Spain and Portugal’s debts were also downgraded substantially.  These unprecedented steps by Standard & Poor’s have many concerned that this financial “contagion” could start spreading across all of Europe.

We’ll take a look at the “austerity measures” being forced on Greece in a moment, but first it is important to note that financial panic is already spreading to other nations in the region.

In Portugal, the government has announced that additional “austerity measures”, beyond those in the current three year plan, are expected to be implemented.  Perhaps they wouldn’t need to take such drastic steps if they hadn’t spent all of those millions constructing those shiny new soccer stadiums a few years ago.  But in any event, many analysts are now forecasting that Portugal will be the next domino to fall.

Officials in Spain are expected to announce this week that unemployment has hit 20%.  But of course any nation that implements a hardcore “cap and trade” law like the one in Spain should expect unemployment to soar into the stratosphere.  So they are just reaping what they have sown, but the fallout could end up being very painful.  Spain’s economy is approximately five times larger than Greece’s so if Spain ends up defaulting it will create a financial nightmare for all of Europe.

There are now rumors that even Italy and Ireland are in a massive amount of trouble financially.

So will the EU and the IMF end up having to bail all of them out?

Well, for now Greece is first in line.

European officials said on Friday that the Greek government, facing a rapidly deteriorating financial situation, is close to completing negotiations for assistance from the International Monetary Fund.

So Greece is going to get the money that it needs – but it comes with strings.

Greece must surrender some of its fiscal sovereignty and adopt a three year program of severe spending cuts and higher taxes.

In fact, one major Greek newspaper says that wage and job cuts for public workers will also be ordered alongside the spending cuts and tax increases to get through what they are calling “three hard years”.

You see, the truth is that Greece is a highly socialized nation.  In a population of just over 11 million people, Greece employs more than a million in the public sector.

Needless to say a lot of these Greek civil servants are not happy at all about the changes the IMF is forcing upon them, and they have called a general strike for May 5th.

For his part, the Greek Prime Minister, George Papandreou, is trying to convince the Greek people that these new spending cuts and tax increases are necessary to keep his nation afloat.  According to The Associated Press, Mr. Papandreou recently told the Greek Parliament the following….

“The measures we must take, which are economic measures, are necessary for the protection of our country — for our survival, for our future, so we can stand firmly on our feet.”

There are even fears that this sovereign debt crisis could spell the end for the Euro.  Back on Wednesday, the leaders of the 16 countries currently using the Euro called an emergency meeting to attempt to avert a Euro meltdown triggered by Greece’s financial collapse.

Of course the Euro is not actually going to collapse, but the fact that they all felt the need to get together and talk about this situation is quite telling.

In fact, the language used by some of the top financial authorities in the world when speaking about the Greek debt crisis is quite alarming….

Angel Gurría, head of the Organization for Economic Cooperation and Development:

“This is like Ebola. It’s threatening the stability of the financial system.”

“The time for horse-trading, prevarication and posturing is over. Arguably, the very future of the euro area is now teetering on a knife edge.”

“If we don’t fix it in Greece, it may have a lot of consequences on the EU.”

But for the people of Greece, getting help with their debt means giving up their ability to determine their own affairs.  They have gotten into so much debt that now they are forced to do whatever the IMF and the EU tell them to do.  Of course there are many in Greece who are extremely upset by this as evidenced by the recent riots there….

But this is what happens when a nation allows itself to get into way too much debt.  In fact, this has been done by design in third world nations for decades.  In his extraordinary book, Confessions of an Economic Hitman, John Perkins explained how it was his job to go around the world and get third world governments to accept multibillion-dollar loans that he knew they would never be able to repay.  Of course when the time came and they could not repay the loans, the big global institutions would go in and confiscate natural resources and impose “conditions” and implement “austerity measures” similar to the ones they are currently imposing on Greece.

The alarming thing today is that it just isn’t third world nations where this game is being played anymore.  Now that they have perfected the blueprint, they are trying it out on nations like Greece.

The reality is that this is all part of the push towards globalization.  In fact, Jean-Claude Trichet, the president of the European Central Bank, emphasized the need for global coordination in financial matters during his April 26th address at the Council on Foreign Relations.

“Global coordination” sounds nice, but just like “global governance” and “global cooperation”, it is just another way of saying that we need to transfer more power and more authority to globalist institutions.

You see, whatever problem that pops up (in this instance it is the Greek debt crisis), the solution always seems to be to transfer more power to global institutions.

As the nations of the world continue to get deeper in debt, and as more power and more money is transferred to unelected global institutions, the people of the world may find their lives increasingly being run by heartless bureaucrats on the other side of the globe.

For anyone who loves freedom, that is a very sobering thought.