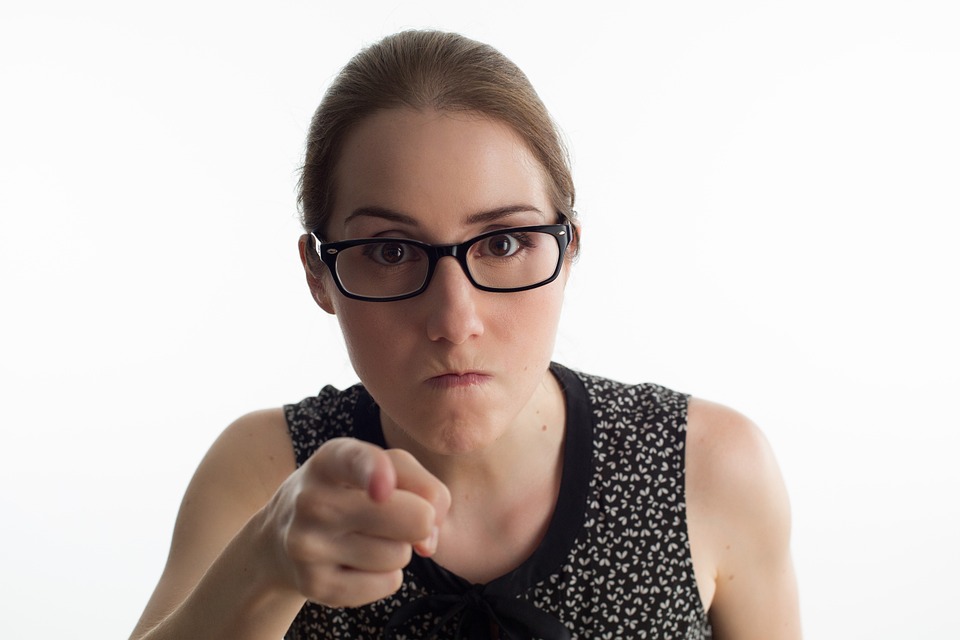 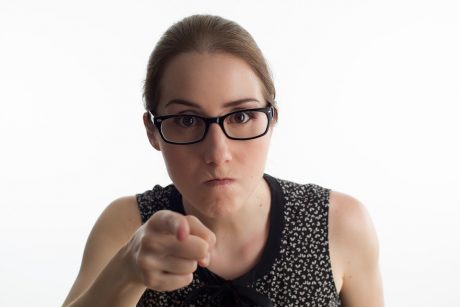 Have you ever asked yourself this question? Ever since I decided to run for Congress, I have spent quite a bit of time thinking about how divided our nation is.  Donald Trump has become the most hated person in America, earlier this year a gunman tried to kill as many Republican members of Congress as possible at a baseball field in Virginia, and the mainstream media is fueling more hatred for conservatives on a daily basis.  I think that I was more than a bit naive in thinking that I wouldn’t be caught up in all of this when I decided to run for public office.  It has only been about a month, and so far I have been slandered repeatedly, my wife and daughter have been called all sorts of names, and even our faith has been attacked.  I have never seen the left so energized in my entire lifetime, but meanwhile those of us that are trying to move the United States in a more conservative direction are facing an uphill battle when it comes to raising funds.  If you believe that people like me should be running for Congress, I hope that you will support my campaign financially.  Since there is no incumbent running in my district, the race is completely wide open, and if I raise enough money I will win because I have the strongest message by a very wide margin.

So far we have created a tremendous amount of buzz all over the district.  On Friday I was down in Coeur d’Alene, and there are some wonderful conservative people down there that are super excited that I am running.  Everywhere we go we are finding that voters are resonating with my extremely conservative message, and if I have enough resources to get this message to every voter in the district, there is no way that I should lose this race.

But of course not everybody is pleased by all the buzz I am creating.

If I win this election, I am very rapidly going to become one of the most hated members of Congress in the entire country.  And the reason why I will be hated so much is because I will be what the left fears the most – a conservative with a backbone.

In the end, this is not a battle about tax rates, the size of government or how to fix our economy.  All of those are very important issues, but at the core this is a fight for the soul of our nation.

Over the past 100 years, we have seen big government leftists take power all over the world.  The “progressives” of today are driven by the same philosophies and are using the same tactics as the communists of the USSR, the brownshirts of Nazi Germany (Nazi: National Socialists), and the Maoists of Red China.  At this moment the “progressives” dominate most of the political systems on the entire planet, and they would love to fully take control of the United States as well, but there are enough of us that still love liberty and freedom to stand in their way.

In leftist societies, big government rapidly becomes the centerpiece of society.  And that is one reason why so many of these big government systems are so godless, because government essentially takes the place of God over time.

Two diametrically opposed worldviews are clashing in our country right now, and eventually one of those worldviews will be vanquished by the other.

For those of us that still believe in life, liberty and the pursuit of happiness, the “progressives” of today are an existential threat.  If the left gets enough power, they will criminalize what we believe by making it “hate speech”.  Sadly, this is already starting to happen in local communities all over America.  And online, a number of social media companies have been making a renewed effort to censor conservative voices in the aftermath of Donald Trump’s surprise election victory last November.  They see how powerful the alternative media has become and they want to shut us up.

Unfortunately, I am seeing a lot of apathy among conservatives right now.  They seem to think that the battle is over because we got Donald Trump into the White House.  What they don’t understand is that the battle is just beginning.  We need people to stand up and fight like never before, and this is something that I talk about in my brand new book entitled “Living A Life That Really Matters”.  If America does not change direction immediately, there isn’t going to be an America.

And actually that is going to be one of my major themes when I speak at Pastor Benjamin Faircloth’s church in Lavonia, Georgia later in August.  The “What’s Next Prophecy Conference” will be held on Saturday, August 19th and Sunday, August 20th, and it will also be available online for those that are not able to make it in person… 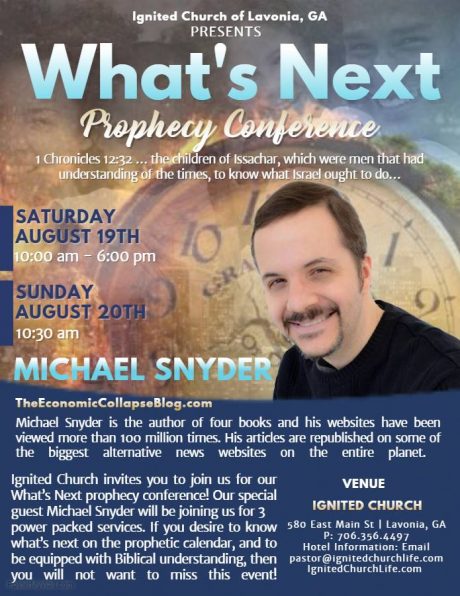 If you live anywhere near Lavonia, I hope that you will come and join us.  This is going to be one of my very few opportunities to travel out of state in the near future, because I am going to be spending almost all of my time traveling all over Idaho for my campaign.

You know, I have actually been criticized by certain Christians for moving into the world of politics.  They seem to believe that “ministry” can only be done in a “church”, and that therefore trying to take my message to a national platform in Washington D.C. must be a “mistake”.

But all I can tell them is that I must do what I feel like God is leading me to do.  And thankfully so many others out there have rallied to my cause and have donated to my campaign.  So far, the leading fundraiser in this race is an attorney from the Boise area named Dave Leroy, and in just four weeks I have already had far more donors than he did during the entire second quarter.  But because he is getting those big $1000 and $2000 checks and I am raising money $10 and $20 at a time, I have a gap to make up.

If you believe in what I am trying to do, I would like to ask for your help.  I am the most conservative candidate in this race by a very wide margin, and it is absolutely imperative that we fill this open seat with a very strong conservative that will relentlessly fight for liberty and freedom.

Most people don’t understand that you do not just vote at the ballot box.  The truth is that you also vote when you decide who to support financially.  So many Americans wouldn’t think twice about spending 20 bucks at a fast food place, but they will never even consider contributing that much toward the fight for the future of our nation.

Every generation of Americans has had to fight for liberty and freedom, and now it is our turn.  My family is putting so much on the line in this race, but there is no possible way that we will be successful without your help.  If you would like to contribute to this fight, you can do so right here or by using a contribution form on my website.  Thank you so much for standing with me, and if we all work together I believe that we will be able to accomplish truly great things…