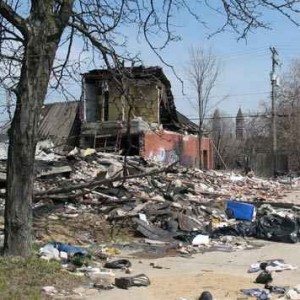 Our recent article, “20 Things You Will Need To Survive When The Economy Collapses And The Next Great Depression Begins“, has drawn some intense criticism from those who believe that the U.S. economy is so strong that it could never completely and totally collapse.  In fact, this blog is being accused of officially going off the deep end.  Why?  It’s not because we are pointing out that the economy is bad.  After all, according to a recent Pew Research national poll, 88 percent of Americans rate national economic conditions as only fair or poor.  No, rather it is because we are projecting the eventual complete and total collapse of the U.S. economy.  There still seems to be a belief among a large number of Americans “that things are never going to get THAT bad”.  But they are going to get that bad.  It’s just that most people do not realize it yet.

But while times are still good (and what we are experiencing now is rip-roaring prosperity compared to what is coming), large numbers of people are going to continue to live in denial.  In fact, those who try to warn people about what is coming are going to be accused of “fear-mongering”.  One recent commenter even accused us of totally going off the deep end like many of the Y2K alarmists did….

“Ok – you’ve officially fallen off the deep end. This blog went from legitimate economic concerns to grand fear mongering. This is the same as Y2K all over again. I have friends who still have bunkers and thousands of dollars of expired canned food and you’re suggesting they go do it again…”

First of all, it was completely and totally obvious that Y2K was going to be a non-event to anyone with a bit of common sense.  There was simply no way that a “computer glitch” that was foreseeable years ahead of time was going to cause the collapse of society.

What is happening with the U.S. economy now is completely different.  We have built an entire economic system on ever-increasing amounts of debt and paper money, and anyone with half a brain should be able to see that such a system is not sustainable in the long-term.  The collapse of the economy is inevitable due to the way that it was constructed.

But the commenter above was not the only one to accuse us of trying to scare people….

“How does the economic collapse lead to a complete halt to all economic activity? More people may be poorer, but they will still have some money to motivate others to produce for a market. The natural disaster scenario seems more plausible for this type of warning. More and more foreclosures don’t. This posting is a bit much for me, seems just some much scaremongering.”

The commenter is right about one thing – a few bad economic statistics are not enough to run out and start preparing for the collapse of society.  After all, the American economy has always recovered no matter what happened before.  If we made it through the Great Depression, we can make it through this, right?

Well, the truth is that there are some fundamental differences between what is happening now and what happened during the Great Depression.

During the Great Depression, most Americans were not up to their eyeballs in credit card debt, car payments, student loans and mortgage debt.

During the Great Depression, most Americans either owned their land or had a great deal of equity in their land.  As we wrote about recently, today that is not the case.  Equity as a percentage of home value in the United States has been hitting all-time record lows.

During the Great Depression, most Americans were not dependent on giant corporations to feed and supply us.  Back then, the majority of Americans knew how to live off the land and grew at least some of their own food.  Today that is most definitely not the case.

During the Great Depression, America still had the greatest manufacturing base in the entire world.  Today we have “offshored” our once great manufacturing base, and we have become a fat, spoiled society that consumes everything in sight but manufactures very little.

During the Great Depression, America did not have a colossal trade deficit.  Today we have got the biggest trade deficit in the history of the world.

During the Great Depression, the wealth of Americans was not being sucked dry by dozens of different kinds of taxes.  Today we are being taxed in so many various ways that many Americans actually end up spending over half their incomes just in taxes.

During the Great Depression, derivatives were not even an issue.  Today, we have created a derivatives bubble that is now well beyond a quadrillion dollars.

In fact, renowned investor Warren Buffett has warned that derivatives are “financial weapons of mass destruction” that could bring down the entire world economic system.

And he is right.

When derivatives collapse, there is not enough money in the world to fix the mess that will be created.  All of the governments in the world working together would not be able to print money fast enough to even make a dent in the colossal wave of red ink that would be created.

The truth is that the U.S. economy (and the world economy for that matter) is teetering on top of a giant pyramid of debt and paper that is on the verge of coming down like a house of cards.

But if you do not want to believe this blog, perhaps you will listen to some of the top financial experts in the world who are also warning that a complete and total economic collapse is coming.

For example, Gerald Celente, the CEO of Trends Research Institute, is forecasting that we are going to see a devastating economic collapse by the year 2012.  It would be easy to dismiss him, except for the fact that he has a sterling track record of forecasts going back 3 decades, and he has appeared on almost all of the major news networks who have no problem relying on him as a source.  What Celente says is on the way for America is absolutely bone chilling….

But if you don’t want to listen to Celente, perhaps you will listen to Peter Schiff, the president of Euro Pacific Capital.  He accurately predicted the recent financial crisis, and he is also forecasting that a depression is on the way.  Schiff is convinced that we need to allow the current “Ponzi economy” to collapse so that something more substantial can arise from the ashes….

Jim Rogers is another financial expert that is forecasting a major economic collapse.  Jim Rogers was a co-founder of the Quantum Fund, and is a college professor, author, economic commentator, and creator of the Rogers International Commodities Index.  He says that civil unrest is on the way and that now is a good time to take up farming if you want to make it through what is coming….

The truth is that the vast majority of Americans have no idea just how vulnerable the U.S. economic system is.  A new Gallup poll has found that 44 percent of Americans believe that they could barely go a month before experiencing severe economic hardship if they lost their jobs.

How long could you go if you suddenly lost your job?

Right now the U.S. economy is being kept afloat by unprecedented U.S. government intervention and spending, but we all know that the U.S. government cannot keep spending money like it is water forever without very serious economic consequences.  To give you an idea of how desperate things have become, just check out the following graphic about the U.S. national debt that was featured in the Chicago Tribune…. 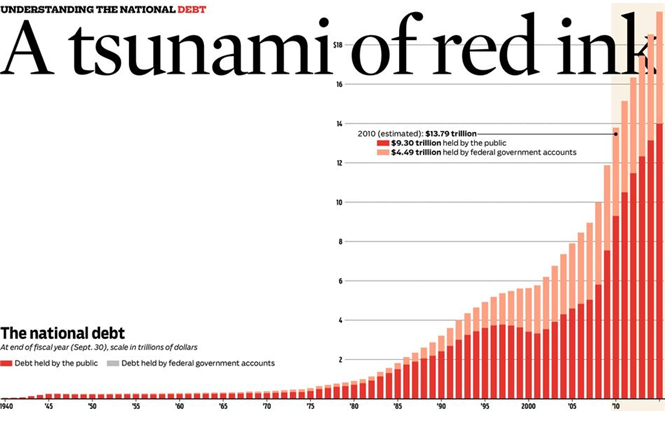 Anyone who believes that such a tidal wave of red ink is sustainable please raise your hand.

The truth is that the U.S. economy is caught in a death spiral.

Already there are some areas of the United States that are literally dying.

For those who do not believe this fact, the following is a challenge for you….

Head down to Detroit and buy one of those houses that are on sale for less than a thousand dollars (in fact there have even been reports of some houses selling for a single dollar in Detroit), and try to live there for a month.

You will quickly learn what it is like to live in an area that is literally dying economically.

When people are hungry and they can’t get jobs they get desperate.

What is happening in Detroit is a preview of what is soon going to happen all over America.

So doubt it all you want, but all the doubting in the world is not going to stop what is coming.  The U.S. economy is dying so you better start getting ready.