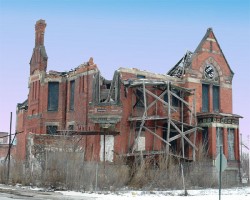 Do you want to know what the future of America is going to look like?  Just check out what is happening to Detroit.  The city of Detroit was once one of the greatest industrial cities in the history of the world, but today it is a rotting, decaying, post-apocalyptic hellhole.  Nearly half the men are unemployed, nearly half the population is functionally illiterate, more than half of the children are living in poverty and the city government is drowning in debt.  As economic conditions have gotten worse, crime has absolutely exploded.  Every single night in Detroit there are frightening confrontations between desperate criminals and exasperated homeowners.  Unfortunately, the police force in Detroit has been dramatically reduced in size.  When the police in Detroit are called, they often show up very late if they even show up at all. Detroit has become a lawless hellhole where violence is the currency of the streets.  If you want to survive in Detroit, you better be ready to fight because there are hordes of desperate criminals that are quite eager to take literally everything that you have got.  But don’t look down on Detroit too much, because what is happening in Detroit will soon be happening all over America.

The following are 20 things we can learn about the future of America from the death of Detroit….

#1 People don’t want to live where the stench of failure and decay is constantly in the air.  Back in the 1950s, Detroit was a teeming metropolis of approximately 2 million people.  According to the 2010 census, only 713,000 people live in Detroit today.  The U.S. Census Bureau says that Detroit lost a resident every 22 minutes during the first decade of this century.

#2 When the economy falls apart, desperate people will do desperate things and many homeowners will fight back.  Justifiable homicide in Detroit rose by a staggering 79 percent during 2011.

#3 In major cities where people are scrambling just to survive, any confrontation can quickly escalate into a life or death affair.  The rate of self-defense killings in Detroit is currently 2200% above the national average.

#4 When there is not enough money to go around, a lot of local governments will choose to cut back on police protection.  Ten years ago, there were approximately 5,000 police for the city of Detroit.  Today, there are less than 3,000.

#5 The essential social services that you are enjoying today will not always be there in the future.  Officials in Detroit recently announced that due to budget constraints, all police stations will be closed to the public for 16 hours a day.

#6 Economic decay is a breeding ground for chaos and violence.  Last Friday and Saturday, a total of nine shootings were reported in the city of Detroit.

#7 More Americans than ever are realizing the benefits of self-defense.  The following is what 73-year-old Julia Brown recently told the Daily….

The last time Brown, 73, called the Detroit police, they didn’t show up until the next day. So she applied for a permit to carry a handgun and says she’s prepared to use it against the young thugs who have taken over her neighborhood, burglarizing entire blocks, opening fire at will and terrorizing the elderly with impunity.

#8 When crime gets go bad that the police are powerless to stop it, vigilante groups begin to form….

In fact, crime has gotten so bad and the citizens are so frustrated by the lack of police assistance that they have resorted to forming their own organizations to fight back.  One group, known as “Detroit 300”, was formed after a 90-year-old woman on Detroit’s northwest side was brutally raped in August.

#9 When criminals become desperate, they will steal literally anything that is not bolted down.  In Detroit today, thieves have stripped so much copper wiring out of the street lights that half of all the lights in some neighborhoods no longer work.

#10 As things fall apart, eventually a time comes when it is not even safe to drive down the road in the middle of the day.  100 bus drivers in Detroit recently refused to drive their routes out of fear of being attacked on the streets.  The head of the bus drivers union, Henry Gaffney, said that the drivers were literally “scared for their lives“….

#11 One of the clearest signs of decline in America is the state of our education system.  Only 25 percent of all students in Detroit end up graduating from high school.  Many other major cities will soon have graduation rates similar to Detroit.

#12 When local governments run out of money they are forced to make tough choices.  After already shutting down dozens of schools, officials in Detroit have announced plans to close down 16 more schools.

#13 A growing percentage of Americans cannot even read or write.  This is a very frightening indication of what the future of America could look like.  According to one stunning report, 47 percent of all people living in the city of Detroit are functionally illiterate.

#14 Sadly, child poverty is absolutely exploding all over the United States.  Today, 53.6 percent of all children that live in Detroit are living below the poverty line.

#15 The employment situation in America is a lot worse than the government is telling us.  An analysis of census figures found that 48.5% of all men living in Detroit from age 20 to age 64 did not have a job in 2008.

#16 When a major city becomes a hellhole, home prices fall like a rock.  The median price of a home in Detroit is now just $6000.

#17 When crime and looting become commonplace, homes in an area can become absolutely worthless.  Some homes in Detroit have been sold for a single dollar.

#18 When depression-like conditions exist in an area for a number of years, large numbers of people will move on to greener pastures.  As of a few years ago, there were more than 40,000 vacant properties in the city of Detroit.

#19 Just because we have a high standard of living today does not mean that will always be the case.  Detroit is just a rotting shell of what it once was, and what is happening to Detroit will happen to much of the rest of America very soon.  The following is what one British reporter found during his visit to Detroit….

#20 When government finances collapse, politicians look for things to sell off and “privatize”.  Unfortunately, the Detroit city government is so broke that it is now considering selling off some of its most famous assets….

Now, the city of Detroit’s most venerable assets — from Belle Isle to the Detroit-Windsor Tunnel — could end up on the auction block as the city fights for its financial life.

Facing mounting debt and the prospect of a state-appointed emergency manager, the city is looking at all options to shed expenses and raise revenue. If city officials can’t come up with a viable budget plan, an emergency manager would have the power to sell assets as part of a financial takeover of Detroit.

But Detroit is not alone.

Lots of other cities all over America are flat broke and out of options.

For example, just check out what is happening in Scranton, Pennsylvania….

Mayor Christopher Doherty is blunt when asked about a court order forcing his Pennsylvania city to pay about $30 million in wages withheld from police and firefighters under a state-approved fiscal recovery plan.

“I don’t have the money,” said Doherty, 53. As for the chance of borrowing the cash, more than half of the city’s projected general-fund revenue, he added, “there’s no financial institution that’s going to give me $30 million to pay it.”

The U.S. economy never recovered from the last major financial crisis, and now another one is on the way.

As the economy crumbles, so will the fabric of our society.

The American people are terribly spoiled and they do not possess the character to handle depression-like conditions with grace and dignity.

In the years ahead, we are going to see rampant rioting and looting in our major cities.  The crime sprees that we will witness in future years will be absolutely unprecedented.

Things did not have to turn out this way, but unfortunately the consequences of decades of really bad decisions are starting to catch up with us.

So what do you think the future of America will look like?  Feel free to leave a comment with your opinion below…. 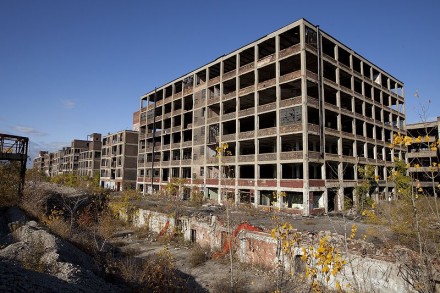