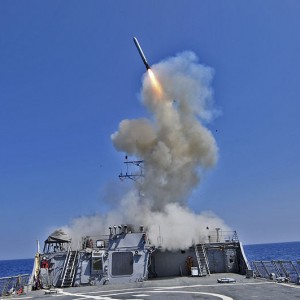 While most of the country is obsessing over Miley Cyrus, the Obama administration is preparing a military attack against Syria which has the potential of starting World War 3.  In fact, it is being reported that cruise missile strikes could begin “as early as Thursday“.  The Obama administration is pledging that the strikes will be “limited”, but what happens when the Syrians fight back?  What happens if they sink a U.S. naval vessel or they have agents start hitting targets inside the United States?  Then we would have a full-blown war on our hands.  And what happens if the Syrians decide to retaliate by hitting Israel?  If Syrian missiles start raining down on Tel Aviv, Israel will be extremely tempted to absolutely flatten Damascus, and they are more than capable of doing precisely that.  And of course Hezbollah and Iran are not likely to just sit idly by as their close ally Syria is battered into oblivion.  We are looking at a scenario where the entire Middle East could be set aflame, and that might only be just the beginning.  Russia and China are sternly warning the U.S. government not to get involved in Syria, and by starting a war with Syria we will do an extraordinary amount of damage to our relationships with those two global superpowers.  Could this be the beginning of a chain of events that could eventually lead to a massive global conflict with Russia and China on one side and the United States on the other?  Of course it will not happen immediately, but I fear that what is happening now is setting the stage for some really bad things.  The following are 22 reasons why starting World War 3 in the Middle East is a really bad idea…

Americans strongly oppose U.S. intervention in Syria’s civil war and believe Washington should stay out of the conflict even if reports that Syria’s government used deadly chemicals to attack civilians are confirmed, a Reuters/Ipsos poll says.

About 60 percent of Americans surveyed said the United States should not intervene in Syria’s civil war, while just 9 percent thought President Barack Obama should act.

#2 At this point, a war in Syria is even more unpopular with the American people than Congress is.

#3 The Obama administration has not gotten approval to go to war with Syria from Congress as the U.S. Constitution requires.

#4 The United States does not have the approval of the United Nations to attack Syria and it is not going to be getting it.

#7 Russia has just sent their most advanced anti-ship missiles to Syria.  What do you think would happen if images of sinking U.S. naval vessels were to come flashing across our television screens?

#8 When the United States attacks Syria, there is a very good chance that Syria will attack Israel.  Just check out what one Syrian official said recently…

A member of the Syrian Ba’ath national council Halef al-Muftah, until recently the Syrian propaganda minister’s aide, said on Monday that Damascus views Israel as “behind the aggression and therefore it will come under fire” should Syria be attacked by the United States.

Al-Muftah stressed that the US’s threats will not influence the Syrain regime and added that “If the US or Israel err through aggression and exploit the chemical issue, the region will go up in endless flames, affecting not only the area’s security, but the world’s.”

#9 If Syria attacks Israel, the consequences could be absolutely catastrophic.  Israeli Prime Minister Benjamin Netanyahu is promising that any attack will be responded to “forcefully“…

#10 Hezbollah will likely do whatever it can to fight for the survival of the Assad regime.  That could include striking targets inside both the United States and Israel.

#12 Starting a war with Syria will cause significant damage to our relationship with Russia.  On Tuesday, Deputy Prime Minister Dmitry Rogozin said that the West is acting like a “monkey with a hand grenade“.

#13 Starting a war with Syria will cause significant damage to our relationship with China.  And what will happen if the Chinese decide to start dumping the massive amount of U.S. debt that it is holding?  Interest rates would absolutely skyrocket and we would rapidly be facing a nightmare scenario.

#14 Dr. Jerome Corsi and Walid Shoebat have compiled some startling evidence that it was actually the Syrian rebels that the U.S. is supporting that were responsible for the chemical weapons attack that is being used as justification to go to war with Syria…

You can examine the evidence for yourself right here.

#15 As Pat Buchanan recently noted, it would have made absolutely no sense for the Assad regime to use chemical weapons on defenseless women and children.  The only people who would benefit from such an attack would be the rebels…

The basic question that needs to be asked about this horrific attack on civilians, which appears to be gas related, is: Cui bono?

To whose benefit would the use of nerve gas on Syrian women and children redound? Certainly not Assad’s, as we can see from the furor and threats against him that the use of gas has produced.

The sole beneficiary of this apparent use of poison gas against civilians in rebel-held territory appears to be the rebels, who have long sought to have us come in and fight their war.

#16 If the Saudis really want to topple the Assad regime, they should do it themselves.  They should not expect the United States to do their dirty work for them.

#17 A former commander of U.S. Central Command has said that a U.S. attack on Syria would result in “a full-throated, very, very serious war“.

#18 A war in the Middle East will be bad for the financial markets.  The Dow was down about 170 points today and concern about war with Syria was the primary reason.

#20 There is no way in the world that the U.S. government should be backing the Syrian rebels.  As I discussed a few days ago, the rebels have pledged loyalty to al-Qaeda, they have beheaded numerous Christians and they have massacred entire Christian villages.  If the U.S. government helps these lunatics take power in Syria it will be a complete and utter disaster.

#21 A lot of innocent civilians inside Syria will end up getting killed.  Already, a lot of Syrians are expressing concern about what “foreign intervention” will mean for them and their families…

“I’ve always been a supporter of foreign intervention, but now that it seems like a reality, I’ve been worrying that my family could be hurt or killed,” said one woman, Zaina, who opposes Assad. “I’m afraid of a military strike now.”

“The big fear is that they’ll make the same mistakes they made in Libya and Iraq,” said Ziyad, a man in his 50s. “They’ll hit civilian targets, and then they’ll cry that it was by mistake, but we’ll get killed in the thousands.”

#22 If the U.S. government insists on going to war with Syria without the approval of the American people, the U.S. Congress or the United Nations, we are going to lose a lot of friends and a lot of credibility around the globe.  It truly is a sad day when Russia looks like “the good guys” and we look like “the bad guys”.

What good could possibly come out of getting involved in Syria?  As I wrote about the other day, the “rebels” that Obama is backing are rabidly anti-Christian, rabidly anti-Israel and rabidly anti-western.  If they take control of Syria, that nation will be far more unstable and far more of a hotbed for terrorism than it is now.

And the downside of getting involved in Syria is absolutely enormous.  Syria, Iran and Hezbollah all have agents inside this country, and if they decide to start blowing stuff up that will wake up the American people to the horror of war really quick.  And by attacking Syria, the United States could cause a major regional war to erupt in the Middle East which could eventually lead to World War 3.

I don’t know about you, but I think that starting World War 3 in the Middle East is a really bad idea.

Let us hope that cooler heads prevail before things spin totally out of control.