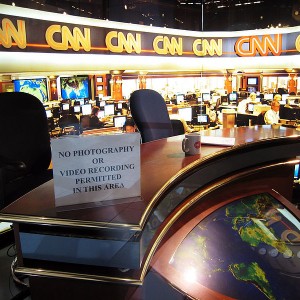 Have you ever wondered who controls the mainstream media?  In America today, we are more “connected” than ever.  The average American watches 153 hours of television a month, and we also spend countless hours watching movies, playing video games, listening to music, reading books and surfing the Internet.  If someone could control the production of all of that media, that would make them immensely powerful.  They would literally be in a position to tell people what to think.  Well, what if I told you that there are just six enormous media conglomerates that combine to produce about 90 percent of all the media that Americans consume.  Would that alarm you?  It should alarm you.  The truth is that our attitudes, opinions and beliefs are greatly shaped by what we allow into our minds.  After all, they don’t call it “programming” for no reason.  Even those of us that realize that we are connected to “the matrix” probably greatly underestimate the tremendous influence that the media has over us.  We live at a time when it is absolutely imperative to think for ourselves, but most Americans are being absolutely overwhelmed with information and seem more than content to let others do their thinking for them.  Sadly, this is greatly contributing to the downfall of our society.

And of course the mainstream media desperately does not want you to look at “the man behind the curtain”.  They just want you to stay plugged into the “programming” that they are feeding you without asking any questions.

#1 The Mainstream Media Has Very Deep Ties To The Establishment

The big news networks have developed an almost incestuous relationship with the federal government in recent years.  But of course the same could be said of the relationship that the media has with the big corporations that own stock in their parent companies and that advertise on their networks.

This is one of the reasons why we very rarely ever see any hard hitting stories on the big networks anymore.  The flow of information through the corporate-dominated media is very tightly controlled, and there are a lot of gatekeepers that make sure that the “wrong stories” don’t get put out to the public.  As a result, many of the “big stories” that have come out in recent years were originally broken by the alternative media.

“Let me take the first arrow: During our coverage of Newtown, I sat on my set and I reported that Nancy Lanza was a teacher at the school. And that her son had attacked her classroom. It’s a hell of a story, but it was dead wrong. Now, I was the managing editor, I made the decision to go ahead with that and I did, and that’s what I said, and I was absolutely wrong. So let me just take the first arrow here.”

Trust in the mainstream media has definitely been slipping.  In fact, a Gallup poll taken last year found that distrust of the media had reached an all-time high.  According to that poll, 60 percent of Americans “have little or no trust” that the media is reporting the news accurately.

A separate Rasmussen Reports survey found that only 6 percent of all Americans consider the news media to be “very trustworthy”.

Hopefully this trend will accelerate and a lot more people will stop trusting the media blindly.

In the old days, the mainstream media had a virtual monopoly on the news.  But these days, anyone with an Internet connection can put up a news site, and this is driving the establishment absolutely bonkers.

For example, Barack Obama is known to have a great dislike for the alternative media.  The following is from a recent WND article…

NBC News Political Director Chuck Todd says President Obama was making it “clear” at the White House Correspondents’ Dinner over the weekend how he feels about the rise of Internet news sites like Politico, Buzzfeed and … well, WND.

“It did seem … I thought his pot shots, joke-wise, and then the serious stuff about the Internet, the rise of the Internet media and social media and all that stuff – he hates it, OK? He hates this part of the media,” Todd said. “He really thinks that the, sort of, the buzzification – this isn’t just about Buzzfeed or Politico and all this stuff – he thinks that sort of coverage of political media has hurt political discourse. He hates it. And I think he was just trying to make that clear last night.”

#5 The Mainstream Media Is Extremely Liberal

When it comes to politics, the mainstream media is far more liberal than the general population is.

Of the 20 major media outlets studied, 18 scored left of center, with CBS’ “Evening News,” The New York Times and the Los Angeles Times ranking second, third and fourth most liberal behind the news pages of The Wall Street Journal.

And even MSNBC has confirmed the liberal bias of the media.  According to MSNBC, mainstream journalists are far more likely to donate their own money to Democrats than they are to Republicans…

MSNBC.com identified 143 journalists who made political contributions from 2004 through the start of the 2008 campaign, according to the public records of the Federal Election Commission. Most of the newsroom checkbooks leaned to the left: 125 journalists gave to Democrats and liberal causes. Only 16 gave to Republicans. Two gave to both parties.

As I mentioned at the top of this article, there are six giant media behemoths that control almost all of the media that we consume.  These corporate giants own television networks, cable channels, movie studios, newspapers, magazines, publishing houses, video game makers, music labels and even many of our favorite websites.

The media ownership chart posted below originally comes from a previous article that I authored entitled “Who Owns The Media? The 6 Monolithic Corporations That Control Almost Everything We Watch, Hear And Read“, but it has been updated to reflect some of the latest information.  The power that these companies have is so vast that it is hard to put into words…

#7 The American People Are Absolutely Addicted To The Mainstream Media

In a previous article about the media, I noted that the average American watches 153 hours of television a month.

When you allow that much information to be downloaded into your brain, it is going to have a dramatic impact on how you think.

Americans are more “connected” than they ever have been before.  This is especially true of our kids.  They are constantly on one sort of electronic device or another.  The following is a brief excerpt from a recent article by Daniel Taylor…

If that Los Angeles Times report is true, that means that our young people are spending more than 200 hours a month connected to the media.

But we are only awake for about 480 hours a month.

When it comes to influencing the American people, nobody has more power than the big media companies do.

And until we can break this sick addiction to the mainstream media and get people to start thinking for themselves, we will never see widespread changes in our society.  As long as people are being “programmed” by the mainstream media, they will continue to express the opinions, attitudes and beliefs that have been downloaded into their minds.