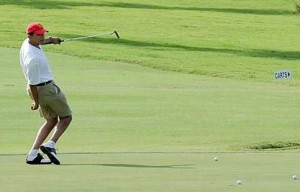 As the crisis in the Gulf of Mexico enters a third month, many are now asking how in the world Barack Obama can keep refusing offers from other countries to help clean up the oil spill.  The truth is that cleaning up oil spills is not rocket science.  There have been massive oil spills in other areas of the world before and there are some folks that have some real expertise when it comes to cleaning them up.  But Barack Obama and BP have been stumbling around as if they are trying to reinvent the wheel.  So exactly what in the world is going on here?  When it comes to Obama’s approach to this crisis, there are really two options.  Either this is one of the most extreme examples of presidential incompetence in modern American history, or Barack Obama is using this crisis for a particular purpose (such as advancing a particular agenda).  In either event, Obama’s actions during this crisis have been completely and totally unconscionable.

The truth is that 13 different countries have offered to help clean up the oil in the Gulf of Mexico.

Barack Obama turned all 13 of them down.

So let’s get this straight….

We are dealing with the greatest environmental disaster in U.S. history by far, and yet we completely refuse any assistance?

What kind of insanity is that?

In fact, it is being reported that just three days after the Deepwater Horizon sank to the floor of the Gulf of Mexico the Dutch government contacted Barack Obama and offered to loan BP ships outfitted with special oil-skimming booms.  In addition, the Dutch had a plan to quickly build sand barriers to protect the vulnerable marshlands along the Louisiana coast.

Needless to say, those plans were not implemented.

According to one Dutch newspaper, the European oil companies that offered to help said that they could have completely cleaned all of the oil from the Gulf of Mexico in just four months.

But now Obama is telling us that the crisis in the Gulf of Mexico could last for years.

So what would keep Barack Obama from accepting international offers of help?

Well, Obama is using something called “the Jones Act” as an excuse.

Howard Portnoy recently described what is going on this way….

In order to accept the offers, which have come from Belgian, Dutch, and Norwegian firms that claim to possess some of the world’s most advanced oil skimming ships, Obama would need to waive the Merchant Marine Act of 1920 (P.L. 66-261). Also known as the Jones Act, the law requires essentially that all commercial acts conducted in U.S.-controlled waters be performed by “U.S.-flag ships, constructed in the United States, owned by U.S. citizens, and crewed by U.S. citizens and U.S. permanent residents.”

So why not simply waive the act? Other presidents have under similar circumstances. George W. Bush waived the Jones Act following Hurricane Katrina, allowing foreign ships into Gulf waters to aid in the relief effort.

The truth is that the Jones Act is not a barrier to receiving assistance at all and Barack Obama knows this.

There would be absolutely no problem with waiving the Jones Act in these circumstances.

So Barack Obama has no excuse.

Either he is completely and totally incompetent or he has been trying to make this crisis worse than it should be.

You see, this is not the first catastrophic oil spill in the history of the world.  There have been others, and we have learned quite a bit about cleaning up oil from those events.  Anthony G. Martin recently described what happened during one particularly brutal oil spill in 1993 and 1994….

In 1993 and ’94 the Saudis faced an oil spill of historic proportions in the Arabian Gulf as four leaking tankers and two oil gushers threatened to spur a catastrophic event that was 65 times worse than the Exxon-Valdez spill.

An American engineer, Nick Pozzi, was part of a task force charged with developing a solution to the looming disaster.

Pozzi had used various methods to clean up oil spills prior to this event.  However, the time was short, and an effective solution was needed post-haste.

That’s when Pozzi decided that the huge, empty oil tankers, sitting in the dock, could be used to simply vacuum up the oil right off of the top of the water.

The result was that 85% of the oil was recovered.

In a recent interview with Esquire, Pozzi explained that cleaning up the oil in the Gulf of Mexico should not be that complicated….

Keep in mind that what supertankers typically do is they sit in the middle of the ocean waiting for all the traders to come up with the right price. When they feel that the price is right, the tankers that are full, they take off, and they can be anywhere in the world in a few days. Right now there are probably 25 supertankers, waiting for orders, full of oil. So all they got to do is come to Texas, in the Gulf, unload the oil, and then turn around and suck up all this other stuff and pump it onto shore into on-shore storage. It’s not rocket science. It’s so simple.

So why won’t Barack Obama and BP implement the “supertanker method”?

When asked about it they just brush it off.

Are they that incompetent?

Or is something else going on?

If this crisis had been handled properly, oil would not currently be blanketing our pristine Gulf coast beaches.

An increasing number of Gulf coast residents have become so frustrated that they have decided to take it upon themselves to stop the oil that is headed towards their homes and businesses.

But BP and the Obama administration have been running around trying to keep anyone else other than themselves from doing anything about this oil spill.  In fact, Barack Obama has authorized the deployment of more than 17,000 National Guard members along the Gulf coast to be used “as needed” by state governors, and BP is being allowed to use private security contractors to keep the American people away from the oil cleanup sites.

If they used as much energy cleaning up the oil as they are in keeping the American people away from the spill they might actually be accomplishing something.

Meanwhile, CBS News is reporting that there could be as much as 1 billion barrels of oil under the damaged BP oil well in the Gulf of Mexico and that it could keep flowing for more than a decade.

Apparently BP made one of the biggest oil discoveries in history, but the problem is that oil is now coming out of there at such high pressure that we simply do not have the technology to control it.

In addition, experts have discovered a massive gas bubble which is estimated to be 15 to 20 miles across and “tens of feet high” under the floor of the Gulf of Mexico.

So what in the world is going to happen if that thing blows?

Also, there are reports of fissures and cracks appearing on the ocean floor around the damaged wellhead.

If this thing goes from a “leak” to an “eruption” it could be a catastrophe beyond anything any of us could even imagine.

But there is another very serious threat that we need to keep an eye on.

Some environmentalists are now warning that North America could be facing years of toxic rain because of the highly toxic chemical dispersants that BP is using to control the Gulf of Mexico oil spill.  Because it is so poisonous, the UK’s Marine Management Organization has completely banned Corexit 9500, so if there was a major oil spill in the UK’s North Sea, BP would not be able to use it.  So BP really needs to start explaining why they are dumping so much of it into the Gulf of Mexico – especially since so much of it could end up raining down on us.

Well, considering the fact that Tony Hayward is set for a massive 10.8 million pound ($16 million) payout if he chooses to step down, perhaps he is not too concerned about exactly how things turn out.

As for Barack Obama, his main concern in all this seems to be advancing his climate agenda.  During a recent interview, Obama directly compared the current crisis in the Gulf to 9/11, and indicated that he believed that it would fundamentally change the way that we all look at energy issues from now on.  But the truth is that cleaning up the oil in the Gulf has nothing to do with the “cap and trade” carbon tax scheme that Obama is trying to foist on all of us.

What Obama needs to do is to accept all the help that is being offered, get everybody working together on cleaning up this mess, and find a way to stop all that oil from coming out of the ground.

Until he makes some progress on those things, the American people are not likely to want to hear the first thing about all of the new taxes, rules and regulations that he is so eager to impose on all of us.

The Gulf of Mexico is literally being destroyed, and already this disaster has been so horrific that the effects will be felt for decades.  If Barack Obama cares one ounce about the American people he needs to start doing his job instead of playing politics with this crisis.