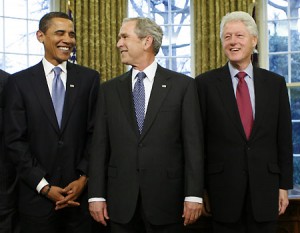 There are very few things that the top politicians in both political parties agree on these days, but one of the things that that they do agree on is that free trade with China is a good thing.  George W. Bush, Dick Cheney, John McCain, Barack Obama, Nancy Pelosi and Harry Reid have all fully supported our trade relationship with China.  In this day and age, virtually anyone who even dares to question how fair our “free trade” is with China is immediately labeled as a “protectionist” and is dismissed as a loon.  But when you sit down and really analyze it, there are a whole lot of very good reasons why both conservatives and liberals should be fundamentally against our unfair trade relationship with China.  But you won’t hear these reasons being talked about on CNN, MSNBC or Fox News.  You won’t hear many members of Congress get up and give speeches about how trade with China is bleeding our economy dry.  Both major political parties have completely and totally bought into “the benefits” of globalism and free trade and there isn’t even much of a national debate about our trade policies anymore.

But there should be a national debate.  Unfortunately, most conservatives are just going to accept whatever their leaders tell them to believe.  Conservatives have been convinced that to be against unfair trade is to be “anti-business” and no conservative ever wants to be anti-business.

Similarly, most liberals blindly follow whatever Obama, Pelosi and Reid tell them to believe.  Millions of hard working Democrat voters have lost their jobs due to our nightmarish trade relationship with China, but they are still convinced that Obama is their savior and that they must not ever say anything that he does is wrong.

Well, I have a message to members of both political parties….

WAKE UP!  YOU HAVE BEEN LIED TO!

If you are truly a conservative, there is no way that you should ever support our trade relationship with China.

If you are truly a liberal, there is no way that you should ever support our trade relationship with China.

Globalism has allowed the big global corporations that dominate our economy to make huge amounts of money, but it has also forced American workers into one gigantic global labor pool.

Are you willing to work 12 hours a day for less than $2.00 an hour in sweatshop conditions?

Well, that is your new competition.

The top 1 percent of all Americans is using globalism to make huge profits, but the standard of living for the rest of us is slowly but surely being forced down toward the rest of the world.

Is that what you really want?

If after reading the reasons below you can still consider yourself a good “conservative” or a good “liberal” and still support our current trade relationship with China please leave a comment to this article.  I would love to hear your reasoning.

10 Reasons Why Conservatives Should Be Against Unfair Trade With China

1 – Conservatives are supposed to be all about creating jobs.  But millions upon millions of good paying middle class jobs have been shipped off to China and they are never coming back.

2 – Once upon a time, conservatives were opposed to communism.  But our trade relationship with China has enabled the largest communist economy in the world to go from third world status to superpower status.  China is now the second largest economy in the world, and that would have never happened without our cooperation.

3 – Conservatives are supposed to be concerned about national security.  But thanks to the massive amount of money they have made from us, the Chinese have been able to dramatically upgrade and modernize their military.  At the top levels of the Chinese government, most officials still believe in the ultimate worldwide triumph of communism, and now thanks to us they have a world class military with which to advance that agenda.

4 – China has a very strict one-child policy which should be absolutely abhorrent to any true conservative.

5 – China uses mobile abortion vans to help enforce the one-child policy.  How any social conservative can justify trade with China after learning this is a total mystery.

6 – If Republicans actually started fighting to protect American jobs from going overseas they could win the “angry working class vote” and take both houses of Congress and the White House in 2012.

7 – Conservatives don’t like when other countries try to take advantage of the American people.  Yet China is taking advantage of the American people by keeping their currency artificially low and most conservatives are strangely quiet about this.  This currency manipulation has put large numbers of U.S. small businesses at a huge competitive disadvantage and has forced many of them to shut down.  Essentially, this currency manipulation has enabled China to get us down on the mat and continually beat the stuffing out of us.  Meanwhile, our politicians stand by and do nothing.

8 – Our trade deficit with China has enabled them to accumulate about a trillion dollars of our debt.  This gives them tremendous leverage over us and is a very serious threat to our economy and to our national security.

10 Reasons Why Liberals Should Be Against Unfair Trade With China

1 – Liberals are supposed to defend unions, yet our trade relationship with China has done more to hurt unions than anything else and most liberal politicians don’t seem to care.  Globalism has put the average American worker in direct competition with the cheapest labor in the world.  Unemployment is going to continue to increase unless something is done to stop the offshoring and outsourcing of our jobs.

3 – Our trade relationship with China (and with the rest of the world) has caused the income inequality gap in America to explode.  The top 1% of all Americans have done very well in this environment while the rest of us suffer.  For much more on this phenomenon, please see my recent article entitled “Winners And Losers“.

4 – Dangerous products from China are pouring into the United States. Liberals should be horrified that so many of our products are now made outside the United States far from the watchful eyes of our regulatory agencies.  Over the past couple of years, there has been headline after headline about dangerous products made in China.  The following is just one example of this: 10 Babies Die Mysteriously At Fort Bragg: Toxic Drywall From China Used In Base Homes The Culprit?

5 – In a global economy, every piece of legislation that Democrats intend to help American workers with ends up backfiring.  For example, a rise in the minimum wage or a law increasing worker benefits causes American workers to become even more expensive and gives corporations even more incentive to move jobs overseas.

6 – “Free Trade” has been the most destructive in the inner cities where Democrats have traditionally gotten a tremendous amount of support.  Shiny new factories are going up all over China while at the same time formerly great manufacturing cities such as Detroit have degenerated into rotting war zones.  This is not good for liberals.

7 – Democrats won’t get elected if there are no jobs.  Each month, more jobs leave the United States for China and the growing number of long-term unemployed workers in the U.S. is not going to be inclined to keep the same politicians in office if this continues.  If liberal politicians value their jobs they should start protecting the jobs of average Americans.

8 – Free trade with China threatens to ruin our social safety net.  It is a good thing to help those in need, but there comes a point where too many people jump on to the net and it breaks down.  Already, one out of every six Americans is enrolled in at least one anti-poverty program.  Over 40 million Americans are on food stamps.  These are not good numbers for liberals.

9 – True liberals should be absolutely horrified by the exploitation of labor in China.  In China, millions of people work in horrific conditions for what is essentially slave labor pay.  The fact that big global corporations are getting rich from this should make the stomach of every liberal turn.

Liberals and conservatives should both be able to agree that it is not a good thing for millions of American jobs to leave the United States and go to China.

Liberals and conservatives should both be able to agree that it is not a good thing that billions of dollars in wealth gets transferred from the United States to China every single month.

But will our leaders wake up and start pursuing a more logical approach to China?

Don’t count on it.