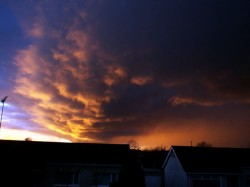 The American people are not equipped to handle hard times.  We are incredibly spoiled.  Most of us have only known good times, and most of us have been taught that we will have endless prosperity all of our lives because we live in the greatest nation on earth.

Well, “the greatest nation on earth” is about to get a massive wake up call.  We are up to our eyeballs in debt and we are bleeding jobs, businesses and wealth at an astounding pace.  Our economy is dying right in front of our eyes, and most Americans have been so “dumbed-down” that they don’t even realize what is happening.

But what most Americans do know is that things are “bad” and they want someone to “fix” things.  They know that something is “not right” and they want things to go back to the way things used to be.  The longer it takes for things to return to “normal”, the angrier they are going to get.

The following are 16 statistics which prove that the American people are absolutely seething with anger right now….

#1 A new Washington Post poll has found that a whopping 78 percent of Americans are dissatisfied “with the way this country’s political system is working”.

#2 That same poll found that only 26 percent of Americans believe that the federal government can solve the economic problems that we are now facing.

#4 According to a recent CBS News/New York Times poll, Congress has a disapproval rating of 82%.

#5 A new Rasmussen survey has found that 85 percent of Americans believe that members of Congress “are more interested in helping their own careers than in helping other people.”

#6 That same survey found that 46 percent of the American people believe that most members of Congress are corrupt.  That figure was a new all-time high.

#7 According to a different Rasmussen survey, only 17 percent of Americans now believe that the U.S. government has the consent of the governed.

#8 A recent Reuters/Ipsos poll discovered that 73 percent of the American people believe that the nation is “on the wrong track”.

#9 A recent poll taken by Rasmussen found that 68 percent of Americans believe that we are actually in a recession right now.

#10 According to Gallup, the percentage of Americans that lack confidence in U.S. banks is now at an all-time high of 36%.

#11 U.S. consumer confidence is now at its lowest level in 30 years.

#12 According to a recent Washington Post-ABC News poll, 90 percent of Americans believe that the economy is performing poorly.

#13 That same poll found that approximately 80 percent of Americans believe that it is “difficult” to find a job these days.

#14 According to one recent poll, 39 percent of Americans believe that the U.S. economy has now entered a “permanent decline”.

#15 Another recent survey found that 48 percent of Americans believe that it is likely that another great Depression will begin within the next 12 months.

#16 According to a brand new Rasmussen survey, 48% of Americans believe that reductions in government spending are “at least somewhat likely” to result in civil unrest inside the United States.

So why doesn’t the government step in and spend a whole bunch of money and make everything all better?

Well, the problem is that we have done this time after time before and now we are broke.

We have been living way, way beyond our means for decades and now the bills are coming due.

David Walker, the former Comptroller General of the United States, has been warning about our debt problem for years.  Walker says that the United States is heading for a “sudden and very painful” economic collapse….

“Here’s the bottom line. If you take the total liabilities of the United States – public debt, unfunded pensions, retiree health care, under funding with regard to social security, with regard to medicare, a range of commitments and contingencies – as of September 30 2010 we would have had to have had $61.6 trillion dollars in the bank in order to be able to defease those obligations.”

The cold, hard truth is that the U.S. national debt should have been addressed many years ago when it was still relatively small.

At this point, there is no solution to our national debt problem under our current financial system.

Most state governments are also facing huge financial problems.  The state government of Illinois is so broke at this point that it can’t even afford to bury the poor people that are dying.

But Illinois is not alone.  All over the country, state and local governments have been implementing austerity measures.

According to the Center on Budget and Policy Priorities, state and local governments have slashed more than half a million jobs since August 2008.

That is a whole lot of good jobs that aren’t there anymore.

But government debt is not the only debt problem that we are facing.  Personal debt is also a raging crisis.

According to USDebtClock.org, the total amount of personal debt in the United States is now over 16 trillion dollars.  The exploding levels of personal debt have created a tremendous amount of stress in households from coast to coast.

According to author David DeGraw, 17.3% of all Americans were living in poverty during 2009.  Not only that, DeGraw also says that 9 major U.S. cities have a poverty rate of over 25 percent.

In fact, there are some cities such as Detroit where the poverty rate is over 35 percent.

It is hard to believe what is happening to America.  Today, there are over 45 million Americans on food stamps.  That number has increased by approximately 12 percent in the last year alone.

There are currently 34 million Americans that need a full-time job.  Unemployment is rampant and there is intense competition even for part-time jobs that pay minimum wage.

So where did all of the jobs go?

Well, as I have written about previously, globalism is absolutely devastating our economy.  Millions of our jobs have been shipped to countries where labor is far, far cheaper and they aren’t coming back.

Most families are really struggling to get by right now.

According to the Washington Post, the average yearly income of the bottom 90 percent of U.S. income earners is $31,244.

It is really hard to pay a mortgage and feed a family on that income.

The only people that seem to be doing well are at the very top.

The average yearly income of the top 0.1% of U.S. income earners is 5.6 million dollars.

Not that making money is a bad thing, but when an economic system funnels all of the rewards to the very top you know something is deeply broken.

The poorest 50% of all Americans now own just 2.5% of all the wealth in the United States.

A lot of poor Americans have literally fallen off the map.  The Daily Mail recently did a feature on one tent city that has been constructed deep in a forest in New Jersey….

In scenes reminiscent of the Great Depression these are the ramshackle homes of the desperate and destitute U.S. families who have set up their own ‘Tent City’ only an hour from Manhattan.

More than 50 homeless people have joined the community within New Jersey’s forests as the economic crisis has wrecked their American dream.

You can see shocking pictures of this tent city right here.

So it is no wonder why so many Americans are so angry.

If you lost your job or your home you would probably be angry too.

Most Americans just want to be able to go to work, make a decent living, pay the mortgage and provide for their families.

But in America today that is becoming increasingly difficult to do.

Our economy is a giant mess and the American people are becoming very angry.

If the economy gets even worse, they are going to become even angrier.

Storm clouds are gathering on the horizon.

Things are about to get very, very interesting.