Would you rather live in the America of 1950 or the America of 2012?  Has the United States changed for the better over the last 62 years?  Many fondly remember the 1950s and the 1960s as the “golden age” of America.  We emerged from World War II as the wealthiest and most powerful nation on the planet.  During that time period, just about anyone that wanted to get a job could find a job and the U.S. middle class expanded rapidly.  Back in 1950, America was still considered to be a “land of opportunity” and the economy was growing like crazy.  There was less crime, there was less divorce, the American people had much less debt and the world seemed a whole lot less crazy.  Most of the rest of the world deeply admired us and wanted to be more like us.  Of course there were a lot of things that were not great about America back in 1950, and there are many things that many of us dearly love that we would have to give up in order to go back and live during that time.  For example, there was no Internet back in 1950.  Instead of being able to go online and read the articles that you want to read, your news would have been almost entirely controlled by the big media companies of the day.  So there are definitely some advantages that we have today that they did not have back in 1950.  But not all of the changes have been for the better.  America is in a constant state of change, and many are deeply concerned about where all of these changes are taking us.

There has never been any society in the history of the world that has been perfect.  America was flawed in 1950 just as America is flawed today.

But that doesn’t mean that we should not reflect on how much things have changed over the past 62 years.

So which version of America would you rather live in?

In 1950, the average duration of unemployment was about 12 weeks.

In 2012, the average duration of unemployment is about 40 weeks.

In 2012, the average family spends about 43% of its income on housing.

In 2012, many of our public schools have been equipped with metal detectors because violence has become so bad.

In 1950, mothers decided what their children would eat for lunch.

In 2012, lunches are inspected by government control freaks to make sure that they contain the “correct foods” in many areas of the country.  For example, one 4-year-old girl recently had her lunch confiscated by a “lunch monitor” because it did not meet USDA guidelines….

The Division of Child Development and Early Education at the Department of Health and Human Services requires all lunches served in pre-kindergarten programs – including in-home day care centers – to meet USDA guidelines. That means lunches must consist of one serving of meat, one serving of milk, one serving of grain, and two servings of fruit or vegetables, even if the lunches are brought from home.

In 1950, redistribution of wealth was considered to be something that “the communists” did.

In 2012, the U.S. government redistributes more wealth than anyone else in the world.

In 1950, about 13 million Americans had manufacturing jobs.

In 2012, less than 12 million Americans have manufacturing jobs even though our population has more than doubled since 1950.

In 1950, the entire U.S. military was mobilized to protect the borders of South Korea.

In 2012, the U.S. borders with Mexico and Canada are wide open and now there are 1.4 million gang members living inside the United States.

In 1950, there were about 2 million people living in Detroit and it was one of the greatest cities on earth.

In 1950, the Dow Jones Industrial Average was slightly over the 200 mark.

In 1950, corporate taxes accounted for about 30 percent of all federal revenue.

In 2012, corporate taxes will account for less than 7 percent of all federal revenue.

In 1950, many Americans dressed up in suits and dresses before getting on an airplane.

In 2012, security goons look at the exposed forms of our women and our children before they are allowed to get on to an airplane.

In 1950, each retiree’s Social Security benefit was paid for by 16 workers.

In 2012, each retiree’s Social Security benefit is paid for by approximately 3.3 workers.

In 1950, many Americans regularly left their cars and the front doors of their homes unlocked.

In 2012, many Americans live with steel bars on their windows and gun sales are at record highs.

In 1950, the American people had a great love for the U.S. Constitution.

In 2012, if you are “reverent of individual liberty“, you may get labeled as a potential terrorist by the U.S. government.

In 2012, the United States owes more money to the rest of the world than anybody else.

One of the only things that is constant in life is change.

Whether we like it or not, America is going to continue to change.

Today, only about 50 percent of all American adults are married.

We are more independent, less religious, more addicted to entertainment and more doped up on prescription drugs than Americans used to be.

We have a higher standard of living than Americans in 1950 did, but we are also drowning in an ocean of debt unlike anything the world has ever seen.

For a lot more on how the U.S. economy is doing in 2012, just check out this list of interesting facts.

Have we made progress since then or are we going backwards? 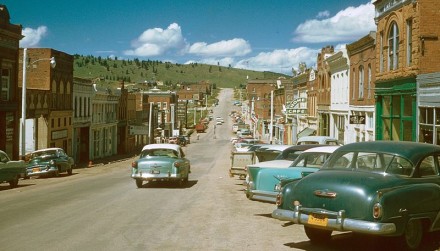