If you are unemployed for an extended period of time, people are going to look at you differently.  Unfortunately, this is especially true if you are a man.  In our society, men are primarily defined by “what they do”.  If you have been unemployed for a long period of time, that can make social interactions even more awkward than normal.  Most people will instantly become more uncomfortable around you when they find out that you are unemployed.  Many will look at you with pity, and others will actually look at you with disdain.  Women will not want to date you, and if you are in a relationship unemployment will put a tremendous amount of strain on it.  Once you “don’t have a job”, you will not get the same level of respect from former co-workers, friends, members of your own family and possibly even your own wife.  So why does our society look down on unemployed men so much?  Well, it is generally expected that men are supposed to be the “breadwinners” for their families.  If a woman stays home with the kids nobody has any problems with that, but if men do the same thing it tends to raise eyebrows.  But there is a big problem.  Our economy is not producing enough jobs for everyone.  In fact, there are millions upon millions more workers than there are jobs.  It would be great if this was just a temporary situation, but as I have written about previously, there will never be enough jobs in America ever again.  So there will continually be millions upon millions of men that are looked down upon by society because they can’t get jobs, and as a result we are going to have millions upon millions of men that are constantly battling against soul-crushing despair.

It can be really hard to “feel like a man” when you aren’t making any money.

And most women simply are not interested in becoming romantically involved with an unemployed man.  Just check out what one recent survey found….

Those are some pretty overwhelming numbers.

So is it the same way when the roles are reversed?

When men were asked the same question, the difference was absolutely shocking….

Admittedly, men are often thinking about other things when they are evaluating whether they want to date a women or not.  Yes, there are some men these days that are concerned about how much money a woman makes, but the truth is that men tend to be much less concerned about income levels than women are.

In fact, a UK study that was released last year discovered that British women are even more concerned about the education and income of a potential mate than they were back in the 1940s.

So if you are unemployed you are probably not going to find much success in the romance department either.

If you are married, being unemployed is likely to put a huge strain on your marriage.  The following is a short excerpt from a recent Business Insider article entitled “TRUE CONFESSION: I’m Sick Of My Unemployed Husband“….

I can’t even remember when my husband stopped working.

And frankly, I don’t have time to think about it, between my full-time job and my fledgling business, volunteering at an after-school program to help teenagers prepare for the professional world and mothering two children.

But when I do think about it–when I think about all the times I come home to see evidence of his entire day’s activities cluttering the coffee table, or when I have to take our shared car to work and strand him at home because he doesn’t feel like getting up to drive me–I’m angry.

If a husband is unemployed for an extended period of time, there is a very good chance that the wife is going to start feeling very resentful.

If things get bad enough, many women will pull the plug on their marriages and will get rid of their “unproductive” husbands.

My goal in writing this is not to “bash women”.  I am just pointing out how hard things are for unemployed men in our society.  Many wives (and their extended families) simply do not understand that our economy has fundamentally changed.  In the old days just about any hard working man that wanted a job could go out and get one.  That is most definitely NOT the case today.

But at a time when husbands need their support the most, many wives withdraw emotionally and become very angry.

For example, how many women have you ever heard declare how proud they are of their unemployed husbands?

Of course there are definitely situations where these roles are reversed and employed husbands are badgering their unemployed wives about getting a job, but in general our society tends to have a greater degree of tolerance for unemployed women than it does for unemployed men.

Sadly, most people simply do not understand how dramatically things have changed in our economy.

The following chart shows the stunning decline in the percentage of working age men with a job over the past 60 years…. 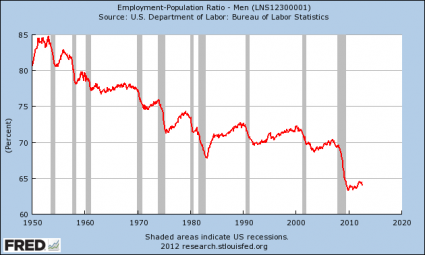 Back in the 1950s, there were times when nearly 85 percent of all working age men had jobs.

We will never get back to anything close to that ever again.

Prior to the last recession, about 70 percent of all working age men were employed.

Since the end of the recession, that number has not gotten back to 65 percent at any point.

That means somewhere around 5 percent of all working age American men have been displaced from the workforce permanently.

The mainstream media would have us believe that we are experiencing an “economic recovery” but that is a massive lie.  The real unemployment numbers are much worse than we have been told.

If you take a look at all working age Americans (men and women), there are actually more than 100 million of them that do not have jobs right now.

I know that statistic can be hard to believe.  I had a hard time believing it at first.  But it is actually true.

Meanwhile, the incomes of those who are working continue to fall.  According to the U.S. Census Bureau, median household income in the United States has fallen for four years in a row.

But this is not a trend that just started recently.  According to one study, between 1969 and 2009 the median wages earned by American men between the ages of 30 and 50 dropped by 27 percent after you account for inflation.

We are in the midst of a long-term economic decline and it is time for all of us to admit how bad things have really gotten.

So what are all of the men who are not working doing these days?

Well, there are some that have chosen to stay at home with the kids.  In a previous article, I discussed how the number of “stay at home dads” has doubled over the past decade.

But the overall percentage of “Mr. Moms” is still very, very low according to Fox News….

The vast majority of working age men still want to work outside of the home and earn a living for their families.

Unfortunately, most families need more than one income to make it these days.  In fact, in many cases both parents are working multiple jobs in an attempt to make ends meet.

This is hitting our young people that are just starting out particularly hard.  For example, during 2011 53 percent of all Americans with a bachelor’s degree under the age of 25 were either unemployed or underemployed.

And as I have written about previously, this is resulting in huge numbers of our young people moving back home with Mom and Dad.

This is particularly true when it comes to young men.  According to CNN, American men in the 25 to 34 age bracket are nearly twice as likely to live with their parents as women the same age are….

The number of adult children who live with their parents, especially young males, has soared since the economy started heading south. Among males age 25 to 34, 19% live with their parents today, a 5 percentage point increase from 2005, according to Census data released Thursday. Meanwhile, 10% of women in that age group live at home, up from 8% six years ago.

How are our young men going to be able to get married and start families if they can’t find jobs and they are living in our basements?

Sadly, things are really hard for everyone right now.  Since June 2009, we have supposedly been in “the Obama recovery”, but median household income in America has fallen during that time period by $3040.

People keep waiting for things to “get better”, but it just isn’t happening.  This was beautifully illustrated the other night during a Saturday Night Live skit that had “Barack Obama” speaking in front of a rally of unemployed and underemployed workers.  You can find video of that skit right here.

There are millions upon millions of men (and women) all over America that are ready and willing to go back to work.

Sadly, there will never be enough jobs for all of them ever again, and that is not going to change no matter who wins the election.

In fact, when the next wave of the economic collapse hits the United States it is likely that unemployment is going to get a whole lot worse.

What will our society look like when that happens? 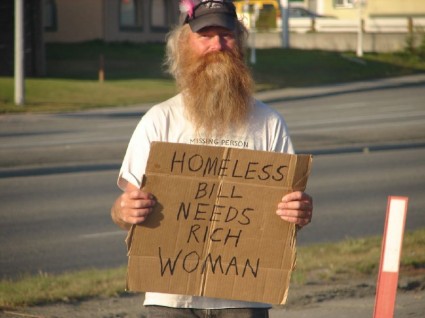