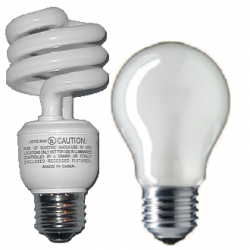 In the United States today, thousands upon thousands of ridiculous federal regulations tightly control almost every area of our lives.  One example of this is that starting on January 1st, we are no longer going to be able to buy certain kinds of light bulbs in the United States.  Back in 2007, President George W. Bush signed a law that mandates the following: “Manufacturers will no longer be able to make the 100-watt Thomas Edison bulb after Jan. 1, 2012, followed by the 75-watt version in Jan. 2013, and the the 60- and 40-watt bulbs in Jan. 2014.”  Yes, you read that correctly.  Federal bureaucrats are running wild and the nanny state has decided that you are simply not going to have the choice to buy traditional light bulbs anymore.  So why the change?  Incandescent light bulbs have not been proven to be unsafe and consumers still want to buy them.  The new CFL (compact fluorescent lamp) light bulbs are more expensive and are actually worse for the environment.  So why was this law passed?  The feds passed it because they decided that existing light bulbs use too much energy and have too large of a “carbon footprint”.  Instead of giving us choices and attempting to persuade us to change, the federal government is ramming their will down our throats.  Well, it is about time that we told the federal bureaucrats that are trying to take our freedoms away that we want them to get their dirty hands off of our light bulbs.

Thankfully there are some members of the House and Senate that are seeking to repeal this law, but right now it looks extremely doubtful that a repeal would ever be signed into law by Barack Obama.

Some people may not think that light bulbs are a big deal, but the truth is that the fact that the government tells us what kind of light bulbs to buy is just another sign of how rapidly liberty and freedom are dying in this country.

The founding fathers intended for this nation to have a very limited central government and lots of room for liberty and freedom.

Unfortunately, this “control grid” has been developing for decades.  The elite that make up America’s ruling class are raised and educated to believe that they know better than the rest of us how things should be done.  They are taught all through school that it is their “responsibility” to impose their vision of “a better life” on all the rest of us.  To the ruling elite, we are all just a bunch of sheep that do not even understand what is best for us.

If it seems like the people running this country are a bunch of “control freaks”, that is because that is exactly what they are.  They are smug, arrogant and convinced that they are better than you are.  They believe that democracy needs to be “directed” and that all of us need to be told what to do and what to believe.

Do you ever get the impression that television news is “talking down” to you?

Well, that is because that is exactly what is happening.

The people that own and deliver the news come from wealth and privilege.  They have been “educated” at schools like Yale, Harvard and Stanford.  They live in cities like New York and Los Angeles and they mingle with the ultra-wealthy and the very famous.  They feel like they are making the world a better place by not only delivering the news but also by telling you what you should think about it.

The establishment has decided that the rest of us are not smart enough to want “the green agenda” on our own, so they are just going to start imposing it on all of us.

So what is so great about the new light bulbs?

Well, the new light bulbs that they are trying to push on us use less energy and therefore leave less of a “carbon footprint”.

But instead of giving us a choice and trying to make their case, they are just banning the old light bulbs that we have been using for decades.

What kind of “freedom of choice” is that?

In addition, these new light bulbs are actually worse for the environment and they have been known to cause health problems.

The following are just a few of the known issues with CFL bulbs….

*When a CFL light bulb is broken it releases high levels of mercury into the air.

*The quality of light produced by CFL bulbs is poorer.

*CFL bulbs tend to flicker and this causes some people to become dizzy or ill.

*CFL bulbs have been associated with migraine headaches and sleep abnormalities.

*CFL bulbs are so toxic that they require special disposal.

*The mercury in CFL bulbs is particularly harmful to fetuses and children.

*The amount of mercury in a CFL bulb is enough to make 1,000 gallons of water unsafe for human consumption.

So what do you do if you break one of these toxic little bulbs in your home?

Well, you better have a few hours to set aside.  The following are some of the guidelines from Maine’s Department of Environmental Protection on how to properly clean up a broken CFL bulb….

What if I accidentally break a fluorescent lamp in my house?

The lamp contains a small amount of mercury, but you can clean this up yourself if you do the following:

* Do not use a vacuum cleaner to clean up the breakage. This will spread the mercury vapor and dust throughout the area and could potentially contaminate the vacuum.

* Keep people and pets away from the breakage area until the cleanup is complete.

* Ventilate the area by opening windows, and leave the area for 15 minutes before returning to begin the cleanup. Mercury vapor levels will be lower by then.

* For maximum protection and if you have them, wear rubber gloves to protect your hands from the sharp glass.

* Carefully remove the larger pieces and place them in a secure closed container, preferably a glass container with a metal screw top lid and seal like a canning jar. A glass jar with a good seal works best to contain any mercury vapors inside.

* Next, begin collecting the smaller pieces and dust. You can use two stiff pieces of paper such as index cards or playing cards to scoop up pieces.

* Put all waste and materials into the glass container, including all material used in the cleanup that may have been contaminated with mercury. Label the container as “Universal Waste – broken lamp.”

* Remove the container with the breakage and cleanup materials from your home. This is particularly important if you do not have a glass container.

* Wash your hands and face.

* Take the glass container with the waste material to a facility that accepts “universal waste” for recycling.

Have you got all that?

You might want to be very careful not to drop any light bulbs in the future.  As you can see, cleaning one up in a huge pain.

But all in the name of conforming to the “green agenda” of the ruling elite, eh?

You know what one of the saddest things about all of this is?

This freedom-killing regulation was signed into law by George W. Bush.  Millions of Republicans went along with it because they were just blindly following whatever Bush did.

Well, you know what?

Bush was an absolutely horrible president and if Republicans want to have any credibility they need to start admitting that.

The elitist Bush passed lots of freedom killing laws like this one, and now the elitist Obama is cramming them down all of our throats.

The sad truth is that Bush and Obama are much more alike than they are different.

Fortunately, there are still a few members of the U.S. government that have some common sense.

For example, have you seen the recent video of U.S. Senator Rand Paul questioning Kathleen Hogan, the deputy assistant secretary for energy efficiency at the Energy Department?

During a recent hearing in the Senate, Rand Paul told Paul told Hogan “my toilets don’t work in my house. And I blame you and people like you who want to tell me what I can install in my house.”

Video of this exchange is posted below….

U.S. Representative Michele Bachmann has also come out against these ridiculous regulations.  She recently had the following to say about her new bill to repeal the light bulb ban….

“The government has no business telling an individual what kind of light bulb to buy.”

She is right about that.

Federal bureaucrats should quit trying to be little “gods”.  They are supposed to be “public servants”.  Americans are fully capable of getting along just fine without the federal government micromanaging every single little detail of our lives.

How can we claim that we are still living in a country that cherishes liberty and freedom if things have progressed this far?

Sadly, every new crop of federal bureaucrats just seems to be worse than the one before it and the U.S. government just continues to grow in size.  There are thousands upon thousands of control freaks that sit in their offices all day thinking of new ways to tighten the “Big Brother” control grid that is being constructed all around us.

Do you feel like you are being suffocated by all of this government control sometimes?

Well, you are not alone.

The truth is that there are millions of Americans that are absolutely sick of it.

It is time for the federal government to get off our backs.

We don’t need some sick, twisted control freaks in Washington D.C. telling us what light bulbs we can or cannot buy.

We are Americans, and our forefathers bled and died so that we could enjoy liberty and freedom in this land.  They did not sacrifice so much so that a bunch of elitists could impose a nanny state on all of us and micromanage all of our lives.

We just want the basic liberties and freedoms that we were taught about as we grew up.

Is that too much to ask?