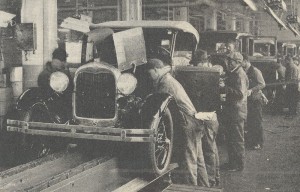 There was a time in America when virtually anyone that wanted a job could go out and get one and the United States boasted the largest and most prosperous middle class in the history of the world.  Sadly, those days are long gone.  Back in 1969, 95 percent of all men between the ages of 25 and 54 had a job.  But now there are millions of Americans in their prime working years that cannot find a job.  Millions of others are working low wage jobs or part-time jobs because that is all they can get.  The other day I went to a large retail store and I got into a conversation with the lady who was checking me out.  She said that she had worked professional jobs all her life, and that she had taken this job to tide her over as she searched for a new job, but now she had been there for two years with no end in sight.  I felt really bad for her, because she was obviously a sharp lady with a lot of skills.  But this is the new reality.  Good paying manufacturing and professional jobs are being replaced by low paying service jobs.  We are transitioning from an economy with plenty of good jobs to an economy with plenty of bad jobs.  The next stage in our transition will be to an economy where it seems like there are no jobs for anyone.  We are witnessing the tragic downfall of the American worker, and it is heartbreaking.

Many of our politicians insist that things are getting better for American workers, but that is simply not true.  Just look at the chart below.  Back at the start of 2008, the percentage of working age Americans with a job was sitting at about 63 percent.  Since then it has fallen below 59 percent and it has stayed there for over 3 years.  After every other recession in the post-World War II era the employment-population ratio has always bounced back.  That has not happened this time… 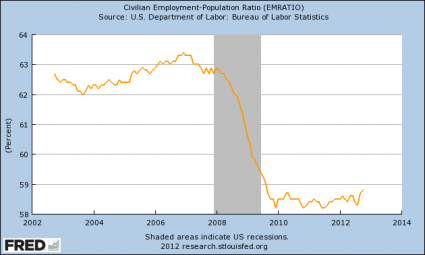 If this number was going to recover, it would have done so by now.  We are rapidly approaching the next major economic crisis and the percentage of working age Americans with a job is going to go even lower.

And our politicians are certainly not helping matters.  Many of the things that they have done are actually going to accelerate the loss of good jobs.  For example, as one small business owner recently pointed out, Obamacare is going to force businesses all over the United States to minimize the number of full-time workers they are using and replace them with part-time workers…

Here is what I am doing for the rest of the year — working with every manager in my company so that as of January 1, 2013, none of our employees are working more than 28 hours a week.   I think most readers know the reason — we have got to get our company under 50 full time employees or else I am facing a bill from Obamacare in 2014 that will be several times larger than my annual profit.  I love my workers.  They make me a success.  But most of my competitors are small businesses that are exempt from the Obamacare hammer.  To compete, I must make sure my company is exempt as well.  This means that our 400+ full time employees will have to be less than 50 in 2013, so that when the Feds look at me at the start of 2014, I am exempt.  We will have more employees working fewer hours, with more training costs, but the Obamacare bill looks like about $800,000 a year for us, at least, and I am pretty sure the cost of more training will be less than that.

This will be unpopular but tolerable to most of my employees.  The vast majority of them are retired and our company is merely an excuse to stay busy, work outdoors, and get a little extra money.

But this is going to be an ENORMOUS change in the rest of the service sector.  I have talked to a lot of owners of restaurants and restaurant chains, and the 40-hour work week is a thing of the past in that business.  One of my employees said that in Hawaii, it was all the hotel employees could talk about.   Many chains are working on mutli-team systems where two teams of people working part-time replace the former group of full-time employees.  2013 is going to see a lot of people (who are not paid very well to begin with) getting their hours and pay cut by 25%.  At the same time that they are required, likely for the first time since many are relatively young, to purchase health insurance.

How could we be so foolish?

Unfortunately, this is not something new.  Our economy has been replacing good jobs with bad jobs for quite some time.  If you can believe it, 60 percent of the jobs lost during the last recession were mid-wage jobs, but 58 percent of the jobs created since then have been low wage jobs.

Will nearly all of us eventually be working in fast food restaurants or stocking shelves at retail giants like Wal-Mart?

Amazingly, the United States actually has a higher percentage of workers doing low wage work than any other major industrialized nation does.

No wonder our middle class is being absolutely destroyed.

At this point, wages as a percentage of GDP are at an all-time low in America.  As millions more good jobs are shipped out of the country, the competition for the remaining jobs will become incredibly fierce and that number will get even lower.

Many Americans that actually do have jobs right now find that they simply don’t make enough to take care of themselves and their families.  They are called “the working poor”, and their ranks are growing steadily.  Today, about one out of every four workers in the United States brings home wages that are at or below the federal poverty level.

American households are getting poorer at a time when prices continue to rise.  Median household income in America has declined for four years in a row.  Overall, it has fallen by over $4000 during that time span.

But have the prices in the stores declined?

No wonder middle class families are feeling more financial stress than ever before.  A survey conducted by the Pew Research Center found that 85 percent of middle class Americans say that it is harder to maintain a middle class standard of living today than it was 10 years ago.

The transition from good jobs to bad jobs in our economy has been taking place for a very long time, and it is not going to be reversed overnight.  Back in 1980, less than 30% of all jobs in the United States were low income jobs.  Today, more than 40% of all jobs in the United States are low income jobs.  There are less tickets to the middle class than there used to be, but neither political party seems interested in stopping the flow of good jobs out of the country.

If we keep doing the same things that we have been doing, we will continue to get the same results.

When I was young, I was told that there would always be “good jobs” available for anyone that got a good education and that worked hard.

What a crock of baloney that turned out to be.

According to a paper that was recently released by the Center for Economic and Policy Research, only 24.6 percent of all jobs in the United States qualify as “good jobs” at this point.

In a previous article, I detailed the three criteria that they used to define what a “good job” is….

More than 75 percent of all jobs in the U.S. today are not “good jobs”, and things are not looking promising for the future.

No wonder so many families are barely surviving these days.  Right now, approximately 77 percent of all Americans are living paycheck to paycheck at least some of the time.  That is a dreadful number.

But if you still do have a job, you should consider yourself to be fortunate.

There are millions upon millions of Americans out there without any job at all.

Did you know that 53 percent of all Americans with a bachelor’s degree under the age of 25 were either unemployed or underemployed during 2011?

Hordes of fresh college graduates are entering the marketplace each year only to find that the good jobs that they were promised simply are not there.

And now it looks like things are getting even worse.  This week Citigroup announced that it plans to eliminate 11,000 jobs in an attempt to reduce costs.  But Citigroup is far from alone.  We have seen dozens of major layoff announcements since the election.  If you doubt this, just see this article and this article.

It is time to wake up and admit that our economy is in an advanced state of decline, that we need to quit shipping our jobs out of the country, and that what we are doing now is clearly not working.

If we are “the greatest economy on earth”, then why are approximately 48 percent of all Americans either considered to be “low income” or are living in poverty?

Our politicians have been pitting different groups of people against one another and many of them have been blaming the wealthy for all of our problems.  Never before in my lifetime have I seen so much anger directed toward those that have money.  This anger is even being expressed in ways that you would not normally expect.  For example, the California Federation of Teachers recently produced a video that portrays wealthy people peeing on poor people.  That shocked me.

Eventually, all of this anger is going to lead to violence if we are not careful.  When the next major wave of the economic crisis strikes and unemployment gets significantly worse, I fear for what might happen.  I believe that it is very possible that we may see mobs of struggling people storm into wealthy neighborhoods and play “Robin Hood” with their possessions.

Instead of hating one another, we need to return to the principles that once made our economy so great.  Those principles would enable everyone to prosper.

Unfortunately, this country continues to turn away from those principles and hate and anger continue to grow.

If we continue down this path, the end result is going to be a complete and total nightmare.

It is possible to turn this economy around.  But we can’t do the same things that we have been doing.  We have to start making better decisions. 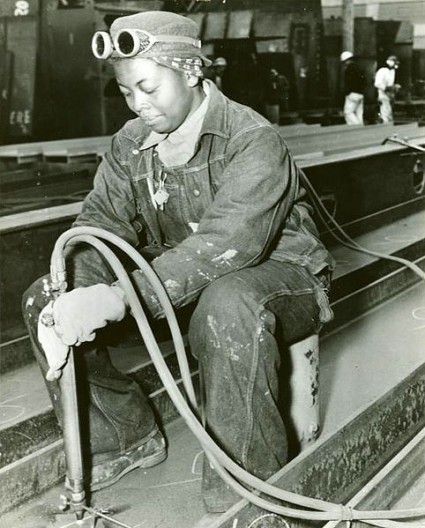