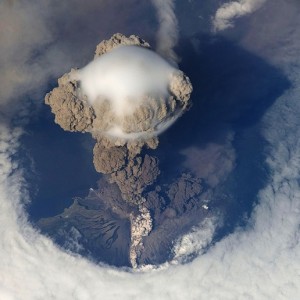 The number of volcanoes that are erupting continues to rise, and scientists cannot seem to explain why this is happening.  In 2013, we witnessed the most volcanic eruptions worldwide that we have ever seen in a single year, and this increased activity has carried over into 2014.  In recent months, we have seen major volcanoes roar to life in Russia, Peru, Hawaii, Reunion Island, Indonesia, and all over Alaska.  It is highly unusual for so many volcanoes to all be erupting at the same time.  According to Volcano Discovery, a whopping 34 volcanoes are erupting around the globe right now.  This is sending a massive amount of dust and ash into the upper atmosphere, and it may explain why many parts of the planet are experiencing strangely cold weather at the moment.  If this trend continues, we could potentially be facing years of crop failures and widespread famines all over the world.

And what we have witnessed already may just be the beginning.  There are several more very large volcanoes around the globe that scientists are extremely concerned about right now.

For example, just check out what is going on in the Philippines…

Mayon Volcano in the province of Albay was placed on “Alert Level 3” on Monday evening, September 15, after showing signs of “relatively high unrest,” the Philippine Institute of Volcanology and Seismology (PHIVOLCS) said.

In a bulletin issued at 10:00 pm, PHIVOLCS observed 39 rockfall events from 5:00 am to 8:00 pm on September 15, symptoms of the build-up of magma at the summit dome. At least 32 low frequency volcanic earthquakes were also recorded, indicating magma intrusion or volcanic gas activity.

PHIVOLCS-DOST raised the alert status of Mayon Volcano from Alert Level 2 to Alert Level 3 which is equivalent to a “Critical Alert” in the agency’s 5-level alert system. This means that the volcano is exhibiting relatively high unrest, magma is at the crater, and that an eruption is possible within weeks.

But of even greater concern is Bardarbunga.  It is the largest volcano system in Iceland, and a major eruption could potentially be absolutely catastrophic…

This time the threat of an eruption – potentially even more powerful than the one in 2010 – is posed by Bardarbunga, the biggest of Iceland’s 30 or so volcanic systems. Located roughly at the country’s centre, the volcano’s 10-kilometre caldera lies several hundred metres beneath Vatnajokull, Europe’s largest glacier by volume.

Scientists are taking the latest rumblings seriously: roughly 8000 years ago, after all, the volcanic leviathan let rip with the largest eruption of the past 10,000 years.

“It is very difficult to predict exactly what will happen with an eruption,” says Monash University vulcanologist Professor Ray Cas, who is president of the International Association for Volcanology and Chemistry of the Earth.

Scientists tell us that over the last 10,000 years Bardarbunga has produced “more lava than any other volcano on the planet.”

If we witness a full scale eruption at Bardarbunga, the cancellation of a few thousand flights may be the smallest of our concerns.

The truth is that we might be looking at the coldest winter that any of us have ever seen in the northern hemisphere.

But don’t just take my word for it.  The following is from a British newspaper article entitled “Icelandic volcano could trigger Britain’s coldest winter EVER this year“…

Depending on the force of the explosion, minute particles thrust beyond the earth’s atmosphere can trigger DECADES of chaotic weather patterns.

Tiny pieces of debris act as billions of shields reflecting the sun’s light away from earth meaning winter temperatures could plunge LOWER THAN EVER before while summer will be devoid of sunshine.

The first effect could be a bitterly cold winter to arrive in weeks with thermometers plunging into minus figures and not rising long before next summer.

If this did happen, there is nothing that we could do to change it.

We would just have to deal with it.

This is a kind of “climate change” that everyone can agree on.  It is well known that volcanic eruptions can substantially lower global temperatures.  In fact, some global warming theorists are already blaming increased volcanic activity for why temperatures have not been rising in recent years…

“In the last decade, the amount of volcanic aerosol in the stratosphere has increased, so more sunlight is being reflected back into space,” said lead author Benjamin Santer, climate scientist at Laurence Livermore National Laboratory, in a press release. “This has created a natural cooling of the planet and has partly offset the increase in surface and atmospheric temperatures due to human influence.”

But if Bardarbunga fully erupts, we could be looking at something a lot worse than a little “global cooling”.

We could potentially be facing winters that never seem to end.

It has happened before in recorded history many times.  The following list comes from Wikipedia…

The effects of volcanic eruptions on recent winters are modest in scale, but historically have been significant.

Most recently, the 1991 explosion of Mount Pinatubo, a stratovolcano in the Philippines, cooled global temperatures for about 2–3 years.

In 1883, the explosion of Krakatoa (Krakatau) created volcanic winter-like conditions. The four years following the explosion were unusually cold, and the winter of 1887-1888 included powerful blizzards.  Record snowfalls were recorded worldwide.

The 1815 eruption of Mount Tambora, a stratovolcano in Indonesia, occasioned mid-summer frosts in New York State and June snowfalls in New England and Newfoundland and Labrador in what came to be known as the “Year Without a Summer” of 1816.

A paper written by Benjamin Franklin in 1783 blamed the unusually cool summer of 1783 on volcanic dust coming from Iceland, where the eruption of Laki volcano had released enormous amounts of sulfur dioxide, resulting in the death of much of the island’s livestock and a catastrophic famine which killed a quarter of the Icelandic population. Northern hemisphere temperatures dropped by about 1 °C in the year following the Laki eruption.

In 1600, the Huaynaputina in Peru erupted. Tree ring studies show that 1601 was cold. Russia had its worst famine in 1601-1603. From 1600 to 1602, Switzerland, Latvia and Estonia had exceptionally cold winters. The wine harvest was late in 1601 in France, and in Peru and Germany, wine production collapsed. Peach trees bloomed late in China, and Lake Suwa in Japan froze early.

The possibility of volcanic eruptions substantially cooling our weather is the biggest “climate threat” that we are facing by far.

Without warm summers and plenty of sunshine, our crops will not succeed.

And global food supplies are already stretched to the limit.  Just this week we learned that one out of every nine people in the world does not have enough food to eat.

What would happen if global food production was cut by 10 or 20 percent for a few years?

So keep an eye on Bardarbunga and the other major volcanoes around the planet that are rumbling right now.

They may just play a major role in our immediate future.