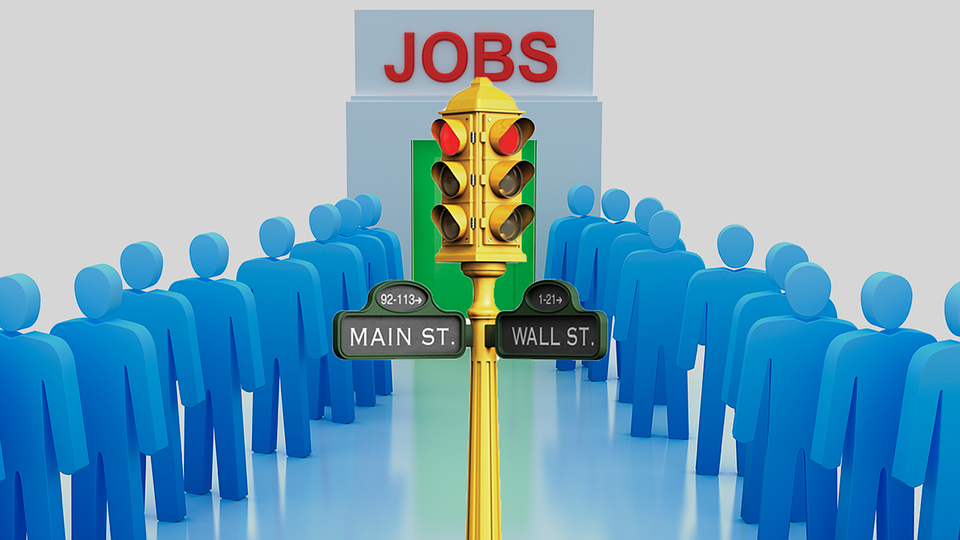 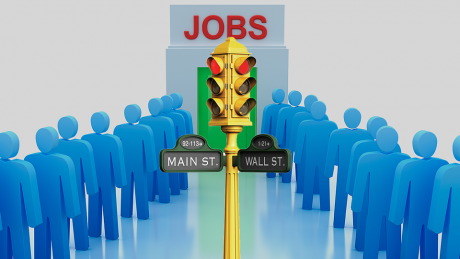 Why doesn’t the government ever just tell us the plain facts? Unfortunately, we live at a time when “spin” is everything, and just about everyone in the mainstream media seemed quite pleased with the “good jobs report” on Friday. However, as Zero Hedge has pointed out, the truth is that the “unadjusted” numbers tell a very different story…

As Mitsubishi UFJ strategist John Herrmann wrote in a note shortly after the report, the “jobs headline overstates” strength of payrolls. He adds that the unadjusted data show a “middling report” that’s “nowhere as strong as the headline” and adds that private payrolls unadjusted +85k in July vs seasonally adjusted +217k.

In Herrmann’s view, the government applied a “very benign seasonal adjustment factor upon private payrolls to transform a soft private payroll gain into a strong gain.”

He did not provide a reason why the government would do that.

Every month, the U.S. economy must create at least 150,000 new jobs just to keep up with population growth. According to the unadjusted numbers, we did not hit that threshold, and so the employment situation in this country actually got worse last month.

When you add those two numbers together, you get a grand total of 102 million working age Americans that do not have a job right now.

Rather than focusing on the headline “unemployment” figure, we get a much fairer look at the employment crisis in the United States when we examine the employment-population ratio. The following chart comes directly from the Bureau of Labor Statistics, and it shows that the percentage of Americans that are employed has never even come close to getting back to where it was just prior to the last recession… 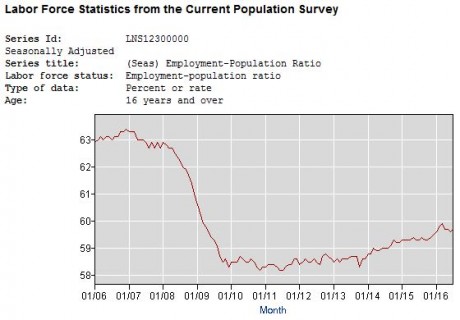 Over the past couple of years we have seen a slight bump in this number, and that is good, but normally after a recession ends the employment-population ratio goes back to at least as high as it was before.  Unfortunately, this has not happened after the last two recessions.  The following comes from Wolf Richter…

The ratio always drops during recessions, but before 2001, it always climbed to higher highs during the recoveries. The 2001 recession and subsequent recovery changed this. For the first time, the ratio never fully recovered, never got even close to fully recovering. That was a new phenomenon: employment growth could no longer keep up with population growth.

When the Great Recession hit, the ratio plunged from its lower starting point at the fastest pace on record (going back to 1948). The Fed’s efforts were all focused exclusively on bailing out bondholders, re-inflating the stock market, re-inflating the housing market, and generally creating what had become the official Fed policy at the time, the Wealth Effect (here’s Bernanke himself explaining it). This has re-inflated asset prices – many of them way beyond their prior bubble peaks.

But the Fed’s astounding focus on capital accelerated the already changing dynamics of the economy, at the expense of labor.

Even the Wall Street Journal admits that we are in the weakest “economic recovery” since 1949, and now there are lots of signs that we have entered a brand new economic downturn.  Here are just a few examples from Chad Shoop…

And lots of ominous signs continue to pop up on Wall Street as well.  For one thing, the Libor rate has surged to the highest level since the last financial crisis.  If you are not familiar with Libor, here is a pretty good explanation of it from Business Insider…

The Libor, or London Interbank Offered Rate, measures the interest rate at which banks lend to each other at different durations, and its sharp jump was a harbinger of the financial crisis.

And according to that same article, the Libor rate is now the highest that we have seen since early 2009…

In the past month, the Libor rate has spiked to rates not seen since the first quarter of 2009, the heart of the banking meltdown.

Not to mention, the spread between the Libor and the Overnight Index Swap rate, which tracks the lending rate from the Federal Reserve, has widened, another potentially worrying sign.

But of course I have been quoting facts and figures like this for months, and yet U.S. financial markets continue to hold it together.

There are literally dozens of parallels between the global financial crisis of 2008 and what is happening in 2016, but Wall Street continues to defy the laws of economics.

Of course it won’t last forever, but it certainly has been a sight to behold.

And I am certainly not alone in my analysis.  As I noted the other day, DoubleLine Capital CEO Jeffrey Gundlach is entirely convinced that stocks “should be down massively”…

For the moment, investors continue to pay extremely irrational prices for stocks, and the mainstream media is just giddy about the state of the economy.

So let us enjoy this very strange period of stability for however much longer it lasts, but let us also protect ourselves from the horrible crash that will inevitably follow.