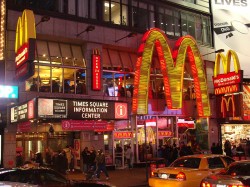 Do you want to know how to find a job in America today?  It’s easy.  Just be willing to flip burgers, wait tables or welcome people to Wal-Mart.  You must also be willing to work for close to minimum wage with no health benefits.  It’s not that complicated.  On April 19th, McDonald’s is going to be holding its first “national hiring day” and it will be attempting to fill 50,000 positions.  Hundreds of thousands of applicants are expected, so if you are going to apply be ready for some stiff competition.  McDonald’s held a similar event last year in its western region and 60,000 people applied for just 13,000 jobs.  But if you are one of the lucky ones, you too may soon be flipping burgers for minimum wage.  Who said that finding a job was hard and that the U.S. economy doesn’t work anymore?  All of us just need to be “flexible” and we all need to be willing to adapt to the “new economic reality”.

Oh, you say that you can’t pay the mortgage and feed your family on what they would pay you at McDonald’s?

You say that you are looking for a “good job”?

Well, that is just too bad.

Good jobs are becoming increasingly scarce.  In fact, there are 10% fewer “middle class jobs” in the United States today than there were a decade ago.

The competition for the few “middle class jobs” that are still available has become so intense that you might not want to steer clear.  You just can’t afford to be too picky in today’s world.

After all, you don’t want to become one of those poor saps that is unemployed month after month after month.  According to the U.S. Bureau of Labor Statistics, the average length of unemployment in the U.S. is now an all-time record 39 weeks.

Can you really afford to be out of work for almost a year?

Why not go after the “low hanging fruit”?  For a position at McDonald’s or Wal-Mart you will probably only be competing against four or five other people for each job opening.  Those odds aren’t that bad.

Things were not always like this in America, you say?

Once upon a time there were actually lots and lots of great jobs?

Well, this is part of the sacrifice that we must make for the emerging global economy.  We must allow thousands of our factories to close and millions of our good paying jobs to be shipped overseas.  Our politicians have all promised us that globalism will be incredibly good for us in the long run.

So don’t be alarmed when naysayers warn that the United States has lost an average of 50,000 manufacturing jobs per month since China joined the World Trade Organization in 2001.

Yes, American workers now must directly compete for jobs with millions of people willing to work for slave labor wages on the other side of the globe.  But eventually their wages will come up slightly and our wages will go way down to their level and at that point we will all have equality.

You aren’t against “equality” are you?

Who could be against equality?

This is what globalism is all about – tearing down all the borders and gathering us all into one big, happy “global family”.  Right now too many of the good jobs are in America so millions of them have to be shipped out of the country.  Also, millions of legal and illegal immigrants must be allowed into the U.S. so that they can compete for American jobs as well.

But won’t that drive wages down?

Of course, but in the end the “global community” will benefit.

What did you think?  Did you actually believe that the United States would be able to have a thriving middle class forever?

In the new “global economy“, the wealthy get to exploit slave labor on the other side of the world thus wiping out the American middle class.

Already we are seeing signs of an “economic recovery” with the ultra-rich leading the way.  According to Moody’s Analytics, the wealthiest 5% of households in the United States now account for approximately 37% of all consumer spending.

That is some “change” that Wall Street can believe in!

But what about the rest of us?

All kidding aside, it is absolutely brutal out there right now.

American families just want jobs that will enable them to pay their mortgages, put food on the table and provide a decent standard of living for their families.

Unfortunately, those jobs are disappearing and they are being replaced by low paying service jobs.

So yes, it has become extremely difficult to find a job that pays a decent wage.

In fact, half of all American workers now earn $505 or less per week.

Could your family survive on $505 a week?

One reader recently left a comment that detailed how this economy has left her without a job, without a home and feeling depressed….

Yup, Im depressed. If I would have known what the WTO protests were about here in Seattle in the 90s, I would have joined in. I knew a lot of folks were very angry, but I wasn’t sure why. I was a busy working mother of a toddler. Now fast forward 10+ years and I haven’t worked in 2 and a half years and only 4 job interviews in that time and 0 job offers. we are going to get paid by Chase to give them our home (gee thanks!) so we can move out… OK now what? things aren’t looking too good. I started a very small business that no where near comes even close to supporting us. So were going to stay in my brother’s house in Texas. and then? who knows. at least I don’t feel alone. there are millions of stories just like mine.

Sadly, there are millions more stories just like this.  The U.S. economy has fundamentally changed and it simply does not work like it used to.

Millions of American families are experiencing severe economic pain right now, and millions more will be experiencing it very soon.

In a previous article entitled, “Where Are The Jobs?“, I explained why things are changing for American workers….

Most Americans don’t really care about the economic minutiae that many of us who study the U.S. economy love to pour over.  When it comes to the economy, the typical American citizen just wants to be able to get a good job, make a decent living and put bread on the table for the family.  For generations, this arrangement has worked out quite well.  The U.S. economy has provided large numbers of middle class jobs and the American people have worked hard and have helped this nation prosper like no other.  But now people are starting to notice that something has shifted.  Millions of people are looking around and are realizing that the jobs that are supposed to be there are not there anymore.  The American people are still working hard (and in many cases harder than ever) but all of that hard work is producing fewer and fewer rewards.  Often politicians will placate voters by telling them that they are working harder and harder for less and less.  That tends to ring true with voters because that is a very accurate description of what so many of them are actually experiencing, but what the politicians don’t tell us is that they are the ones to blame for the situation that we are in.  As millions of jobs become obsolete because of technology and millions of other jobs are shipped overseas, our politicians tell us over and over that we can “compete” with anyone and that if we will just go out and get some more education we can make it happen.  But those of us who are extremely over-educated know what a fraud that line is.  The truth is that there are not nearly enough jobs for all of us no matter how “educated” we are.  This is creating a lot of anger and frustration, and now even the IMF is warning that we could see “an explosion of social unrest” if high unemployment persists.

Unfortunately, most of our politicians do not have any answers.  Bill Clinton greatly accelerated the shipping of our jobs overseas.  George W. Bush was a complete and total disaster when it came to the economy.  Barack Obama has been continuing most of the economic policies of those that came before him.

But waiting for Washington D.C. to change is kind of like waiting for hell to freeze over.  The Federal Reserve is not going to help us either.  In fact, the Fed is at the very heart of our economic problems.

No, the truth is that the U.S. economy is going to continue to go downhill.  All of us need to try to become less dependent on the system, because when it collapses it is going to devastate the lives of tens of millions of American families.